14 Build a plot layer by layer

One of the key ideas behind ggplot2 is that it allows you to easily iterate, building up a complex plot a layer at a time. Each layer can come from a different dataset and have a different aesthetic mapping, making it possible to create sophisticated plots that display data from multiple sources.

You’ve already created layers with functions like geom_point() and geom_histogram(). In this chapter, you’ll dive into the details of a layer, and how you can control all five components: data, the aesthetic mappings, the geom, stat, and position adjustments. The goal here is to give you the tools to build sophisticated plots tailored to the problem at hand.

So far, whenever we’ve created a plot with ggplot(), we’ve immediately added on a layer with a geom function. But it’s important to realise that there really are two distinct steps. First we create a plot with default dataset and aesthetic mappings: 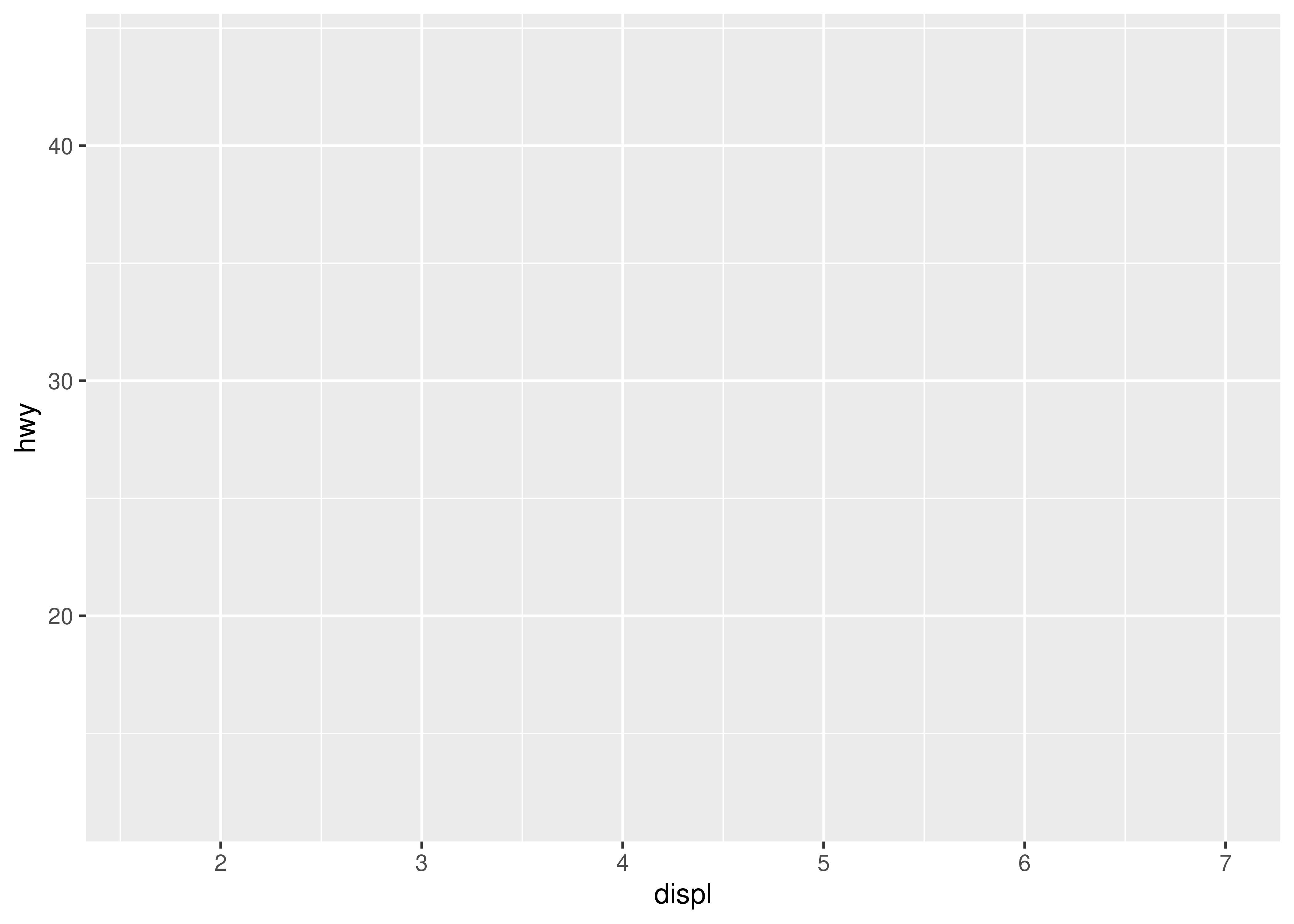 There’s nothing to see yet, so we need to add a layer: geom_point() is a shortcut. Behind the scenes it calls the layer() function to create a new layer:

This call fully specifies the five components to the layer:

It’s useful to understand the layer() function so you have a better mental model of the layer object. But you’ll rarely use the full layer() call because it’s so verbose. Instead, you’ll use the shortcut geom_ functions: geom_point(mapping, data, ...) is exactly equivalent to layer(mapping, data, geom = "point", ...).

Every layer must have some data associated with it, and that data must be in a tidy data frame. Tidy data frames are described in more detail in R for Data Science (https://r4ds.had.co.nz), but for now, all you need to know is that a tidy data frame has variables in the columns and observations in the rows. This is a strong restriction, but there are good reasons for it:

The data on each layer doesn’t need to be the same, and it’s often useful to combine multiple datasets in a single plot. To illustrate that idea I’m going to generate two new datasets related to the mpg dataset. First I’ll fit a loess model and generate predictions from it. (This is what geom_smooth() does behind the scenes)

Next, I’ll isolate observations that are particularly far away from their predicted values:

I’ve generated these datasets because it’s common to enhance the display of raw data with a statistical summary and some annotations. With these new datasets, I can improve our initial scatterplot by overlaying a smoothed line, and labelling the outlying points: (The labels aren’t particularly easy to read, but you can fix that with some manual tweaking.)

Note that you need the explicit data = in the layers, but not in the call to ggplot(). That’s because the argument order is different. This is a little inconsistent, but it reduces typing for the common case where you specify the data once in ggplot() and modify aesthetics in each layer.

In this example, every layer uses a different dataset. We could define the same plot in another way, omitting the default dataset, and specifying a dataset for each layer:

I don’t particularly like this style in this example because it makes it less clear what the primary dataset is (and because of the way that the arguments to ggplot() are ordered, it actually requires more keystrokes). However, you may prefer it in cases where there isn’t a clear primary dataset, or where the aesthetics also vary from layer to layer.

The aesthetic mappings, defined with aes(), describe how variables are mapped to visual properties or aesthetics. aes() takes a sequence of aesthetic-variable pairs like this:

(If you’re American, you can use color, and behind the scenes ggplot2 will correct your spelling ;)

Here we map x-position to displ, y-position to hwy, and colour to class. The names for the first two arguments can be omitted, in which case they correspond to the x and y variables. That makes this specification equivalent to the one above:

While you can do data manipulation in aes(), e.g. aes(log(carat), log(price)), it’s best to only do simple calculations. It’s better to move complex transformations out of the aes() call and into an explicit dplyr::mutate() call. This makes it easier to check your work and it’s often faster because you need only do the transformation once, not every time the plot is drawn.

Never refer to a variable with $ (e.g., diamonds$carat) in aes(). This breaks containment, so that the plot no longer contains everything it needs, and causes problems if ggplot2 changes the order of the rows, as it does when faceting.

14.4.1 Specifying the aesthetics in the plot vs. in the layers

Aesthetic mappings can be supplied in the initial ggplot() call, in individual layers, or in some combination of both. All of these calls create the same plot specification:

Within each layer, you can add, override, or remove mappings. For example, if you have a plot using the mpg data that has aes(displ, hwy) as the starting point, the table below illustrates all three operations:

If you only have one layer in the plot, the way you specify aesthetics doesn’t make any difference. However, the distinction is important when you start adding additional layers. These two plots are both valid and interesting, but focus on quite different aspects of the data: 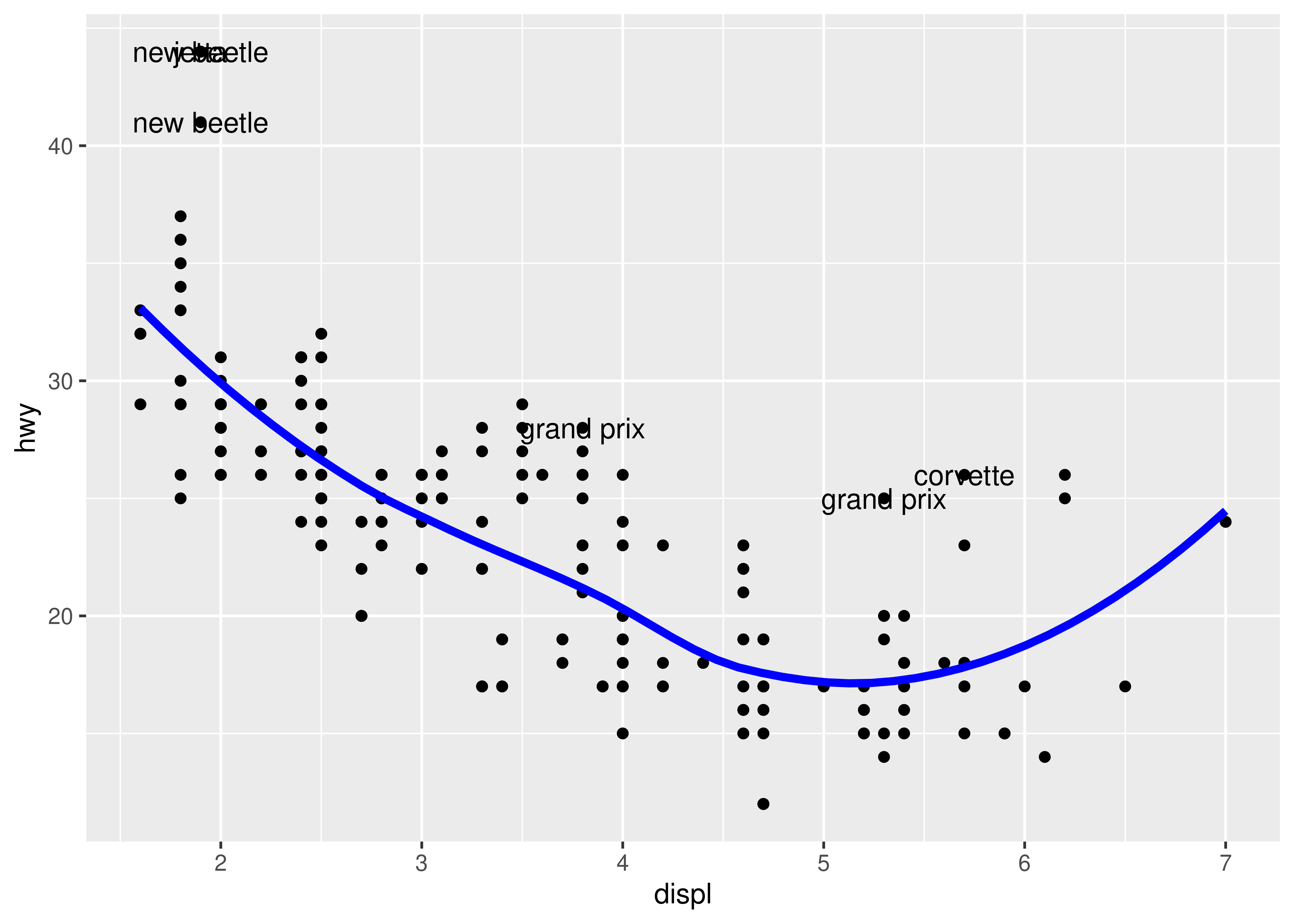 Generally, you want to set up the mappings to illuminate the structure underlying the graphic and minimise typing. It may take some time before the best approach is immediately obvious, so if you’ve iterated your way to a complex graphic, it may be worthwhile to rewrite it to make the structure more clear.

The following plots are created with similar code, but have rather different outputs. The second plot maps (not sets) the colour to the value ‘darkblue’. This effectively creates a new variable containing only the value ‘darkblue’ and then scales it with a colour scale. Because this value is discrete, the default colour scale uses evenly spaced colours on the colour wheel, and since there is only one value this colour is pinkish. 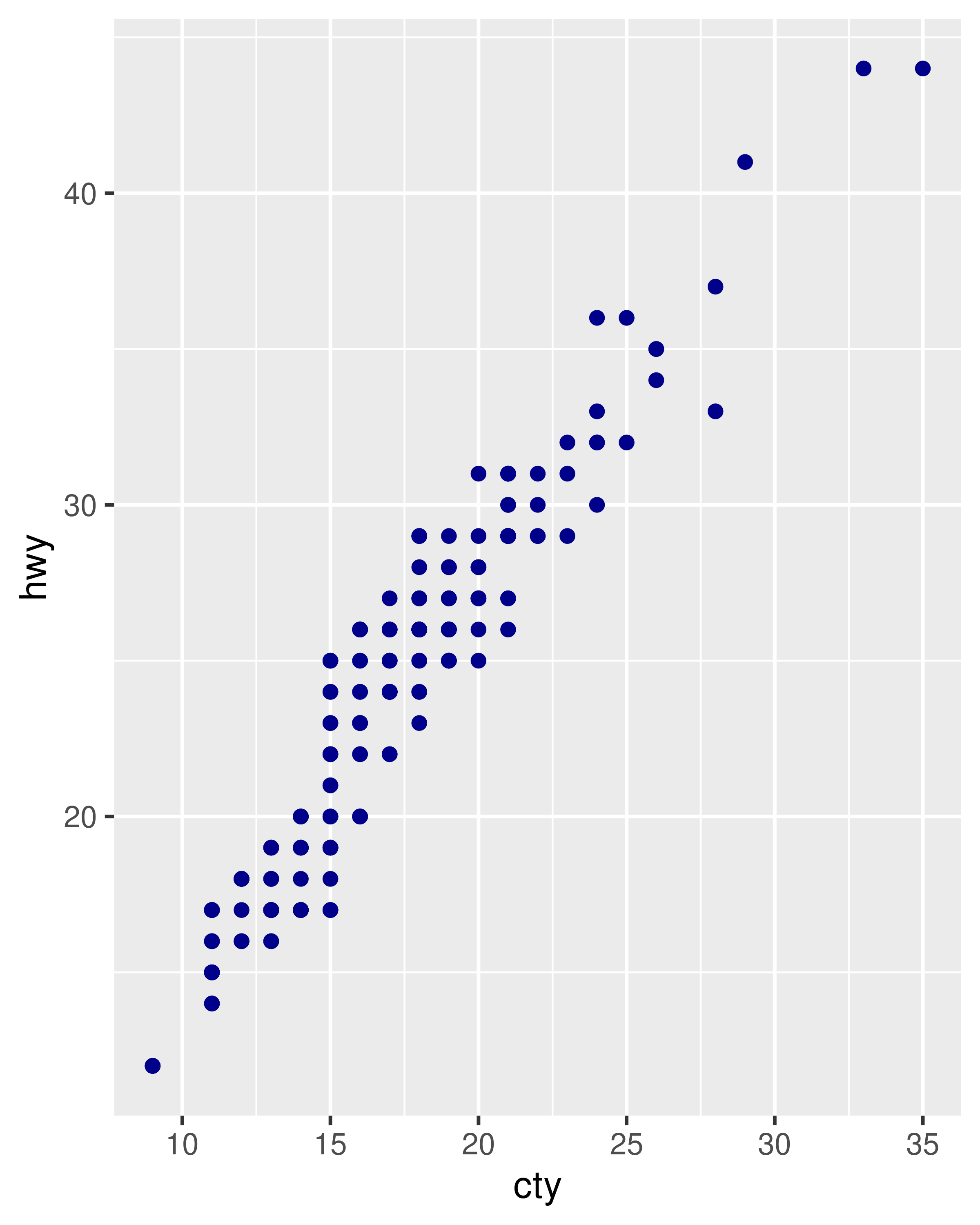 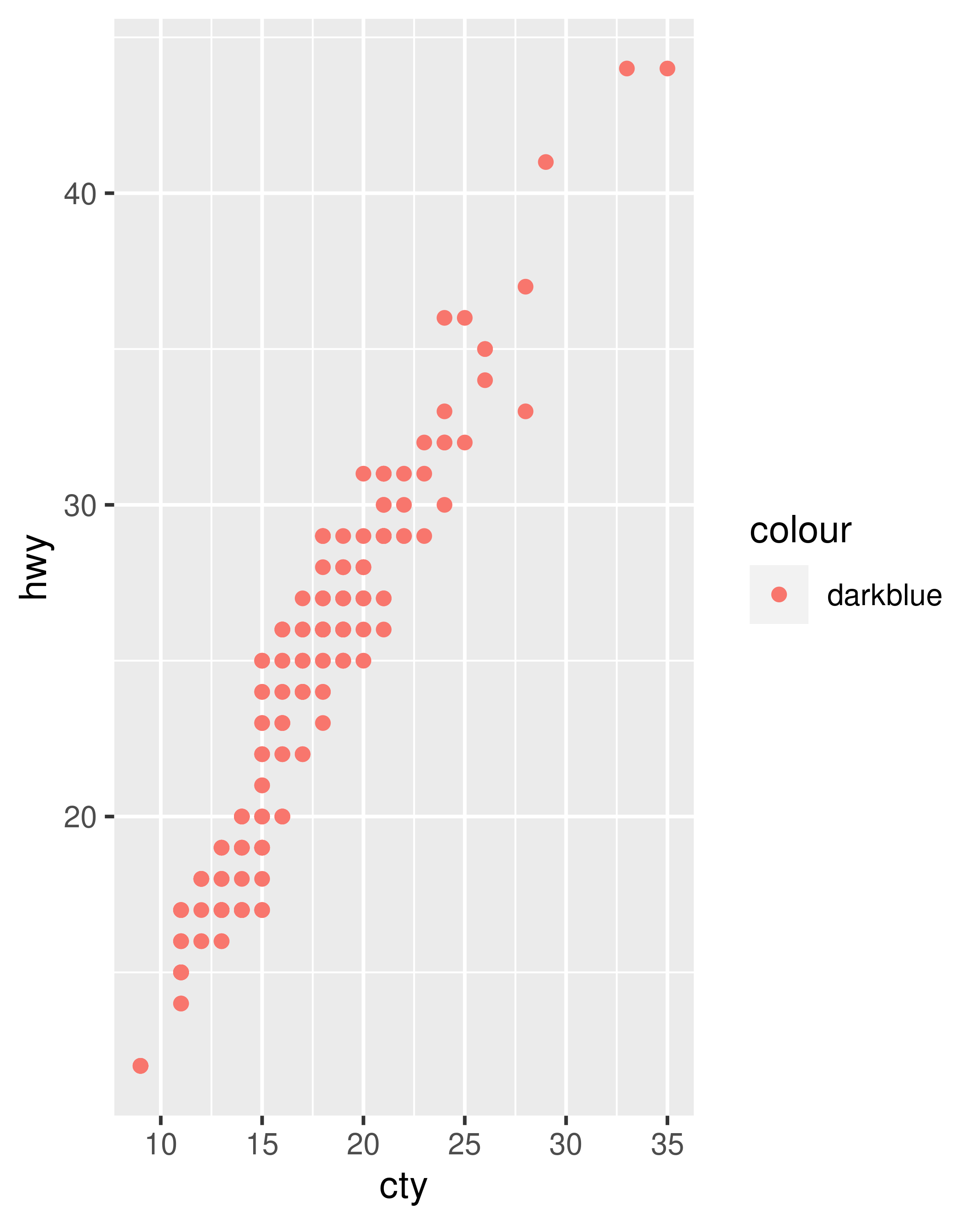 A third approach is to map the value, but override the default scale: This is most useful if you always have a column that already contains colours. You’ll learn more about that in Section 12.5.

It’s sometimes useful to map aesthetics to constants. For example, if you want to display multiple layers with varying parameters, you can “name” each layer: Geometric objects, or geoms for short, perform the actual rendering of the layer, controlling the type of plot that you create. For example, using a point geom will create a scatterplot, while using a line geom will create a line plot.

Some geoms differ primarily in the way that they are parameterised. For example, you can draw a square in three ways:

If alternative parameterisations are available, picking the right one for your data will usually make it much easier to draw the plot you want.

A statistical transformation, or stat, transforms the data, typically by summarising it in some manner. For example, a useful stat is the smoother, which calculates the smoothed mean of y, conditional on x. You’ve already used many of ggplot2’s stats because they’re used behind the scenes to generate many important geoms:

You’ll rarely call these functions directly, but they are useful to know about because their documentation often provides more detail about the corresponding statistical transformation.

Other stats can’t be created with a geom_ function: I think it’s best to use the second form because it makes it more clear that you’re displaying a summary, not the raw data.

These generated variables can be used instead of the variables present in the original dataset. For example, the default histogram geom assigns the height of the bars to the number of observations (count), but if you’d prefer a more traditional histogram, you can use the density (density). To refer to a generated variable like density, “after_stat()” must wrap the name. This prevents confusion in case the original dataset includes a variable with the same name as a generated variable, and it makes it clear to any later reader of the code that this variable was generated by a stat. Each statistic lists the variables that it creates in its documentation. Compare the y-axes on these two plots: 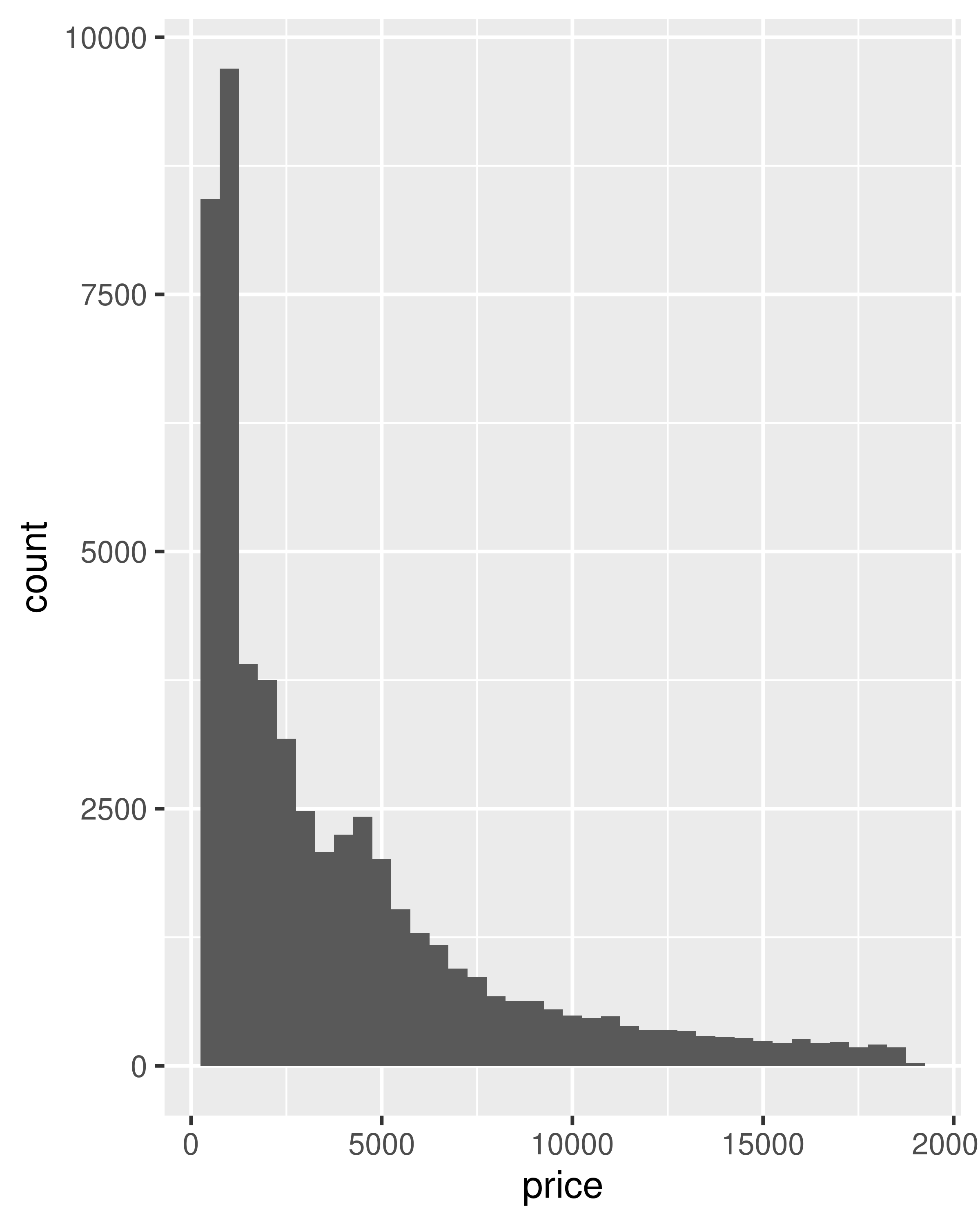 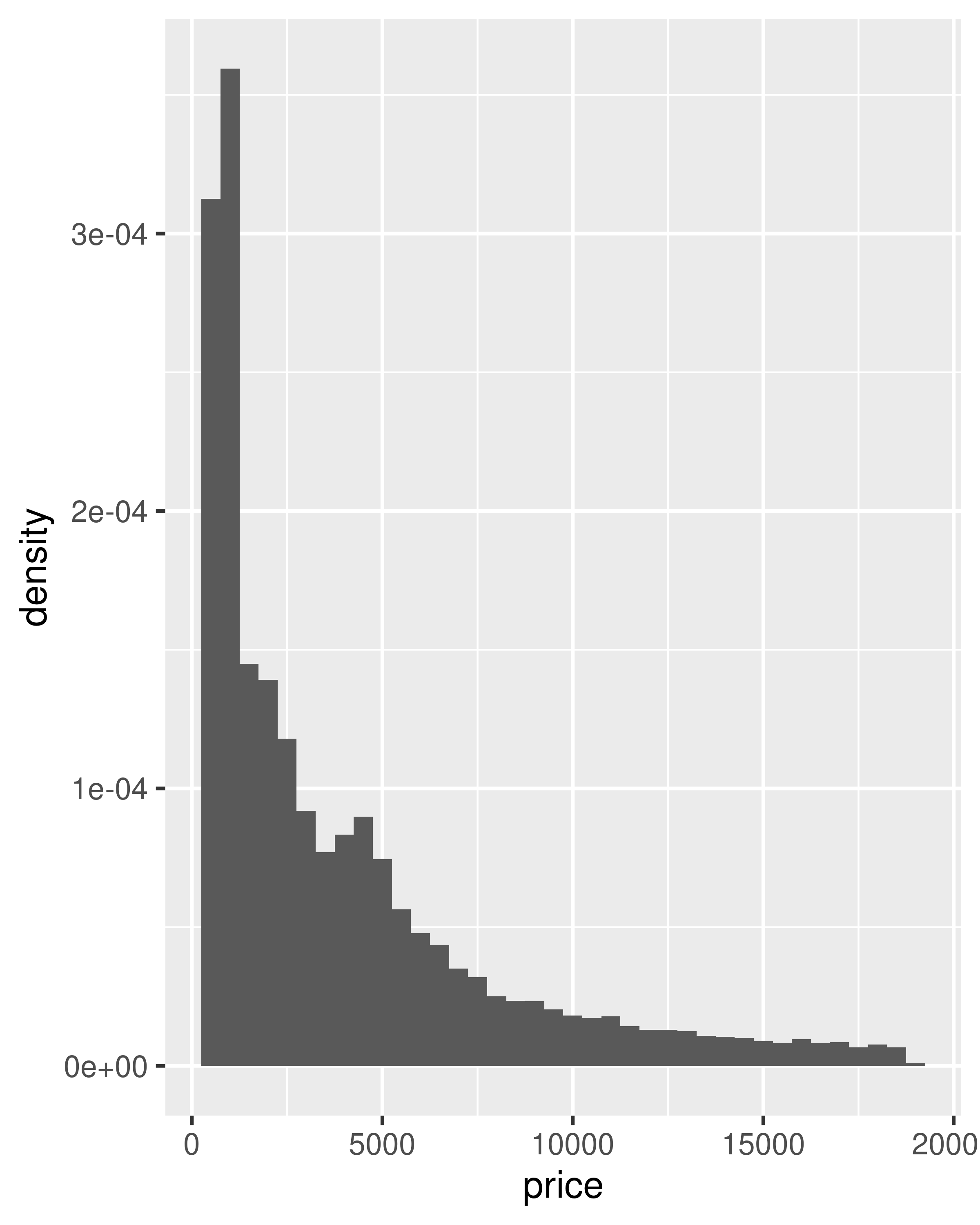 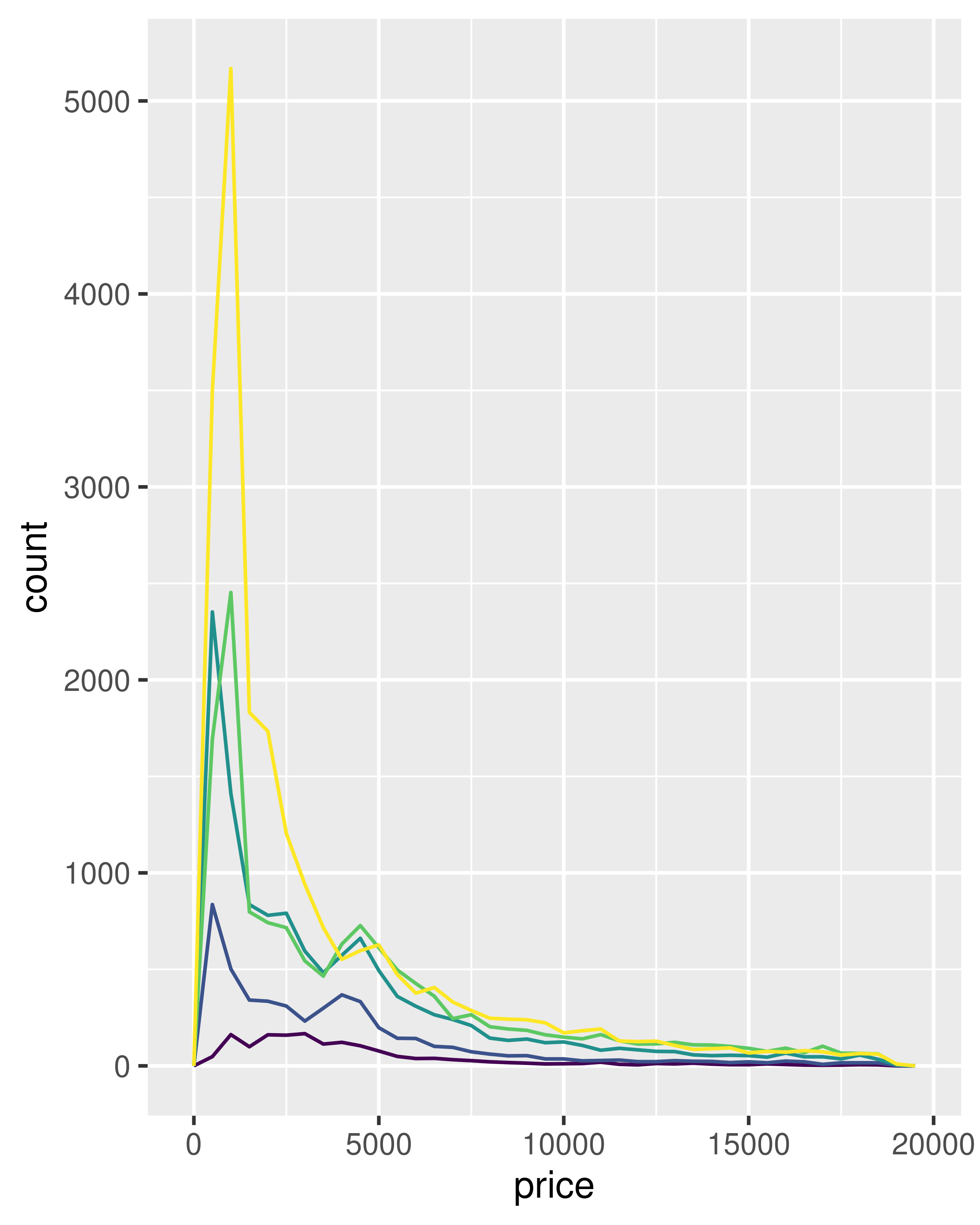 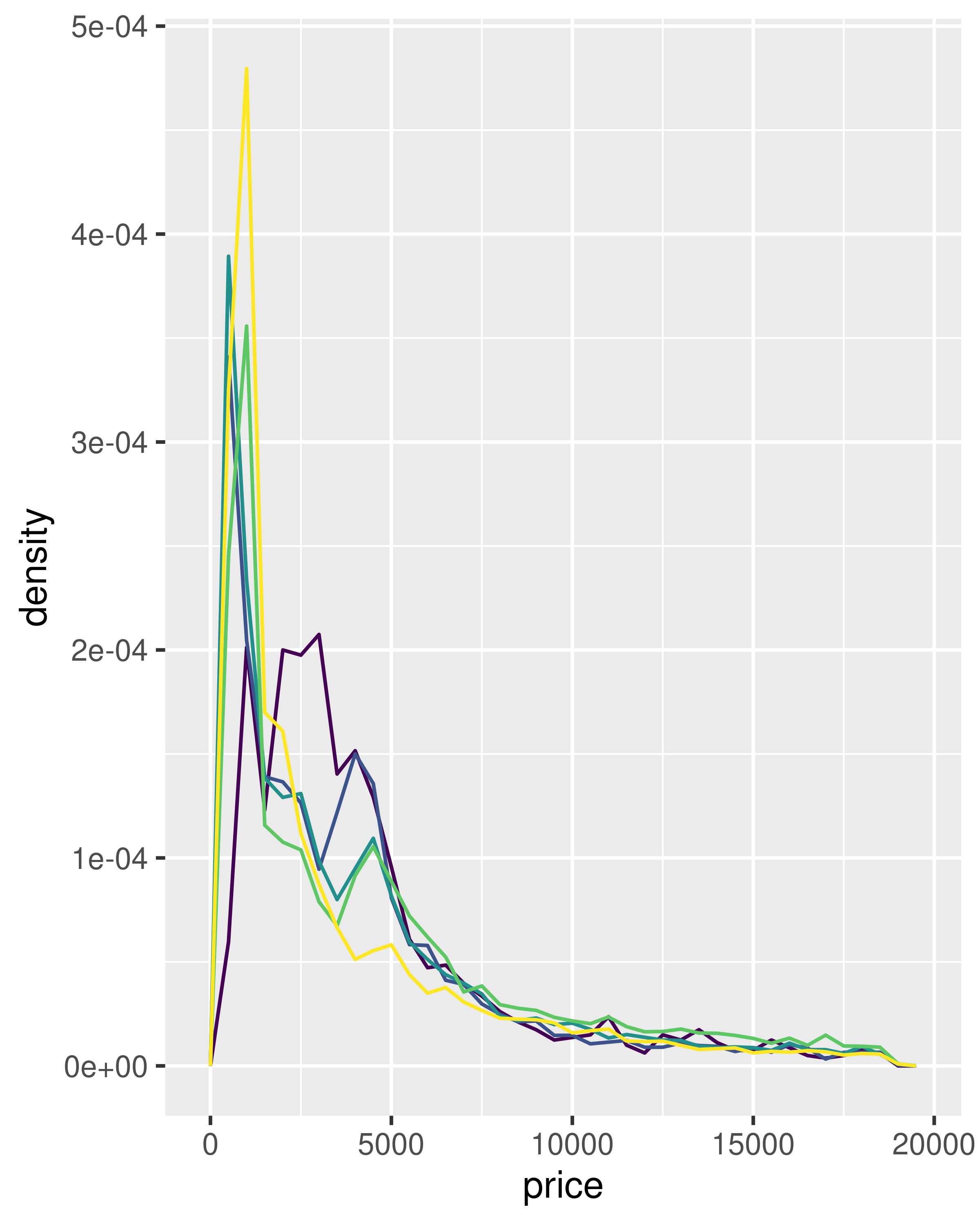 The result of this plot is rather surprising: low quality diamonds seem to be more expensive on average. 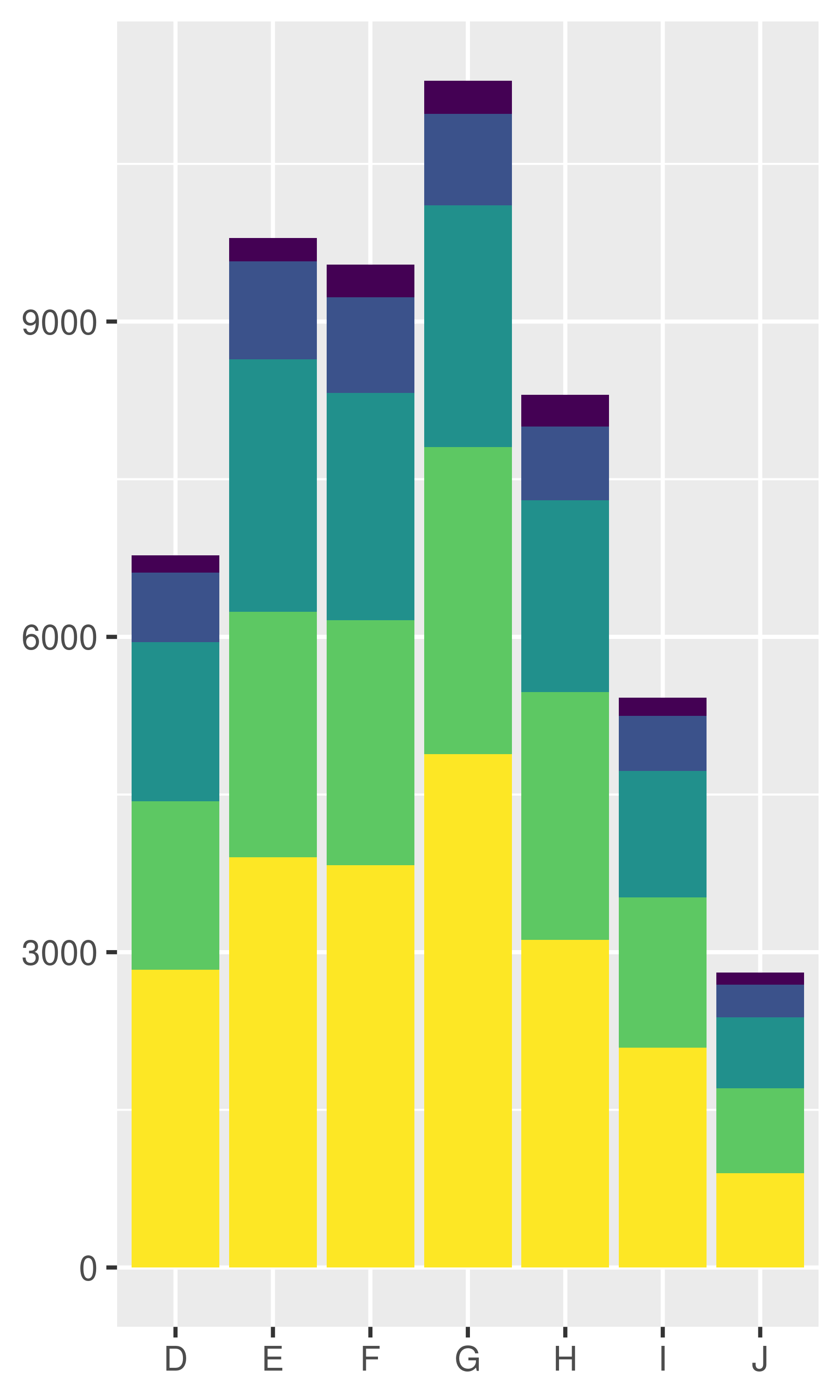 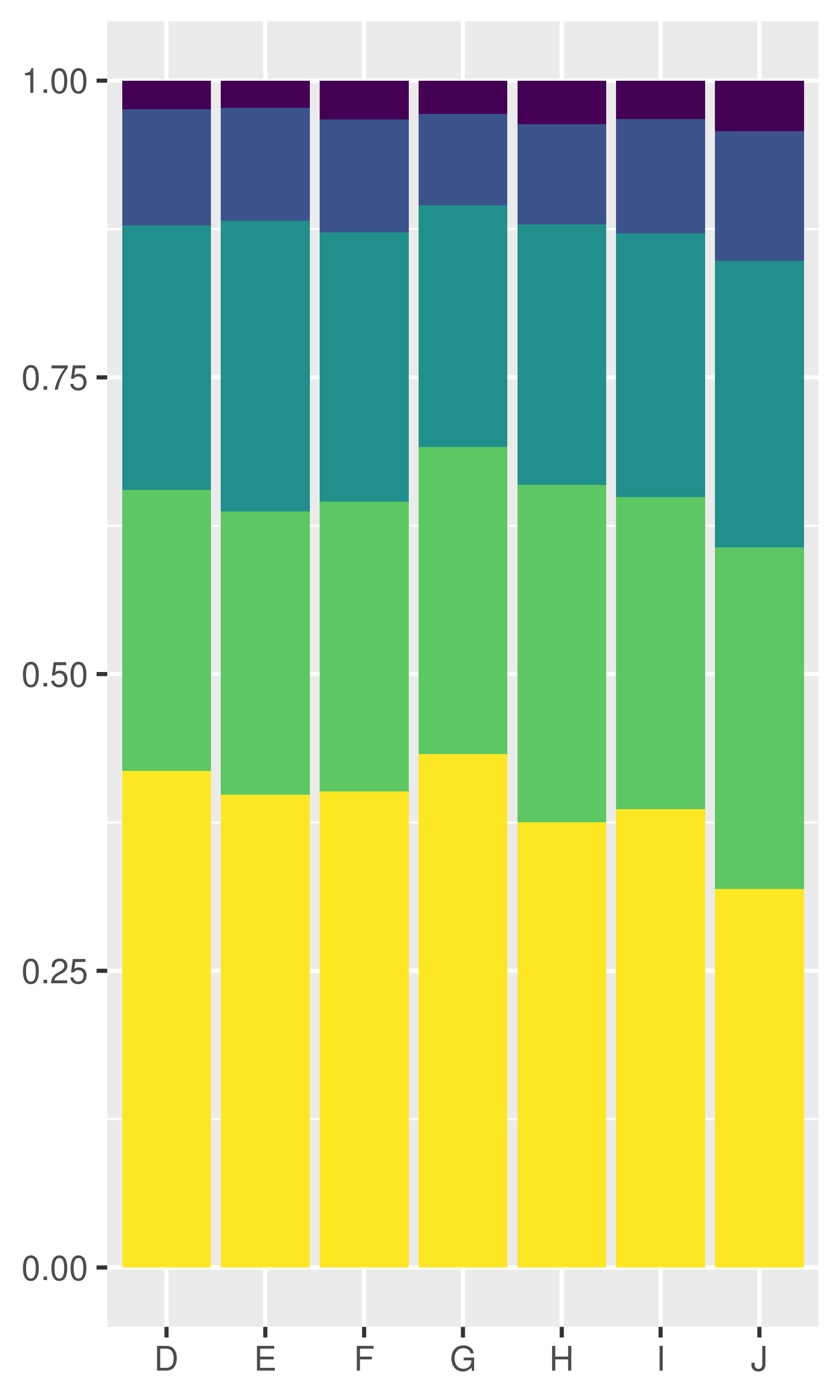 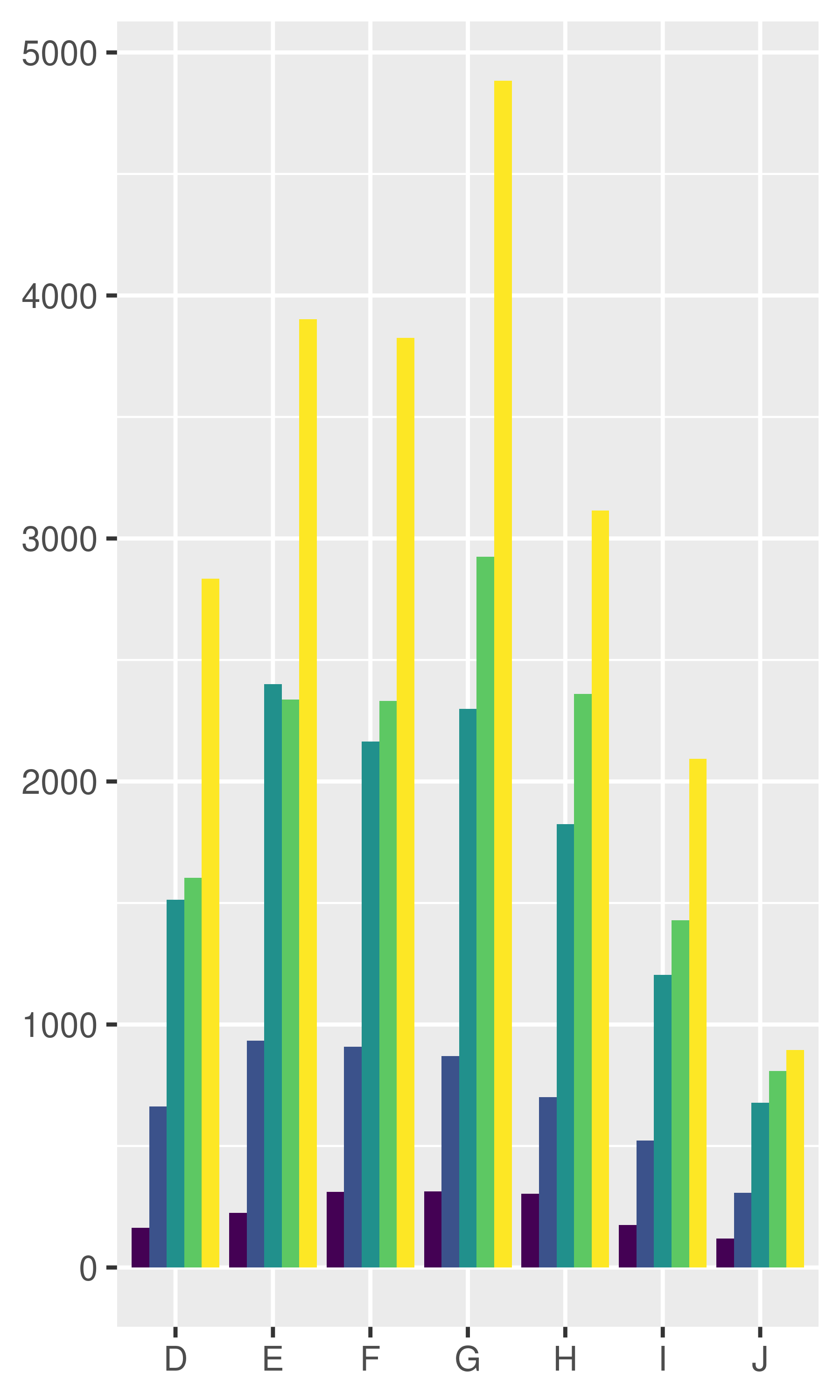 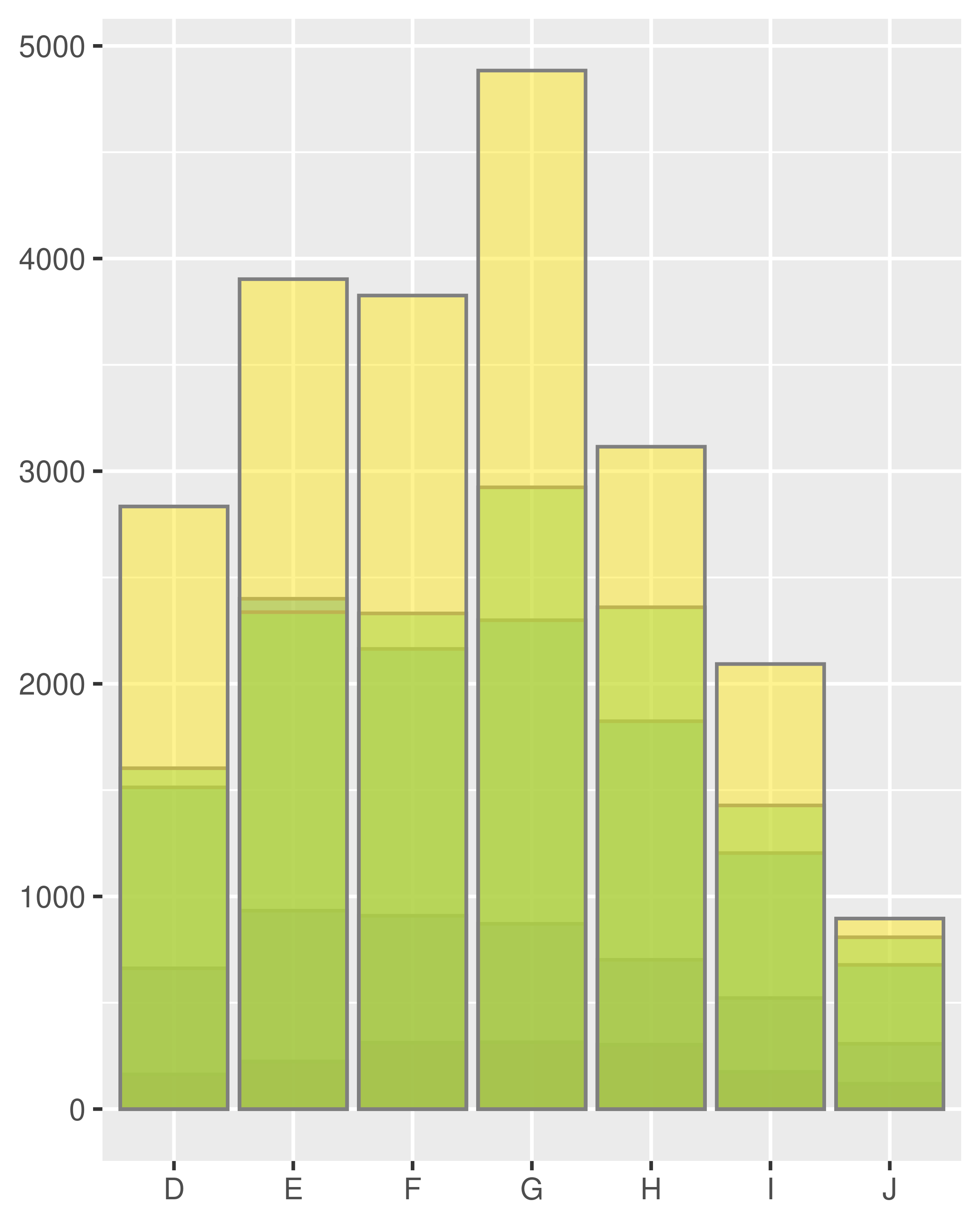 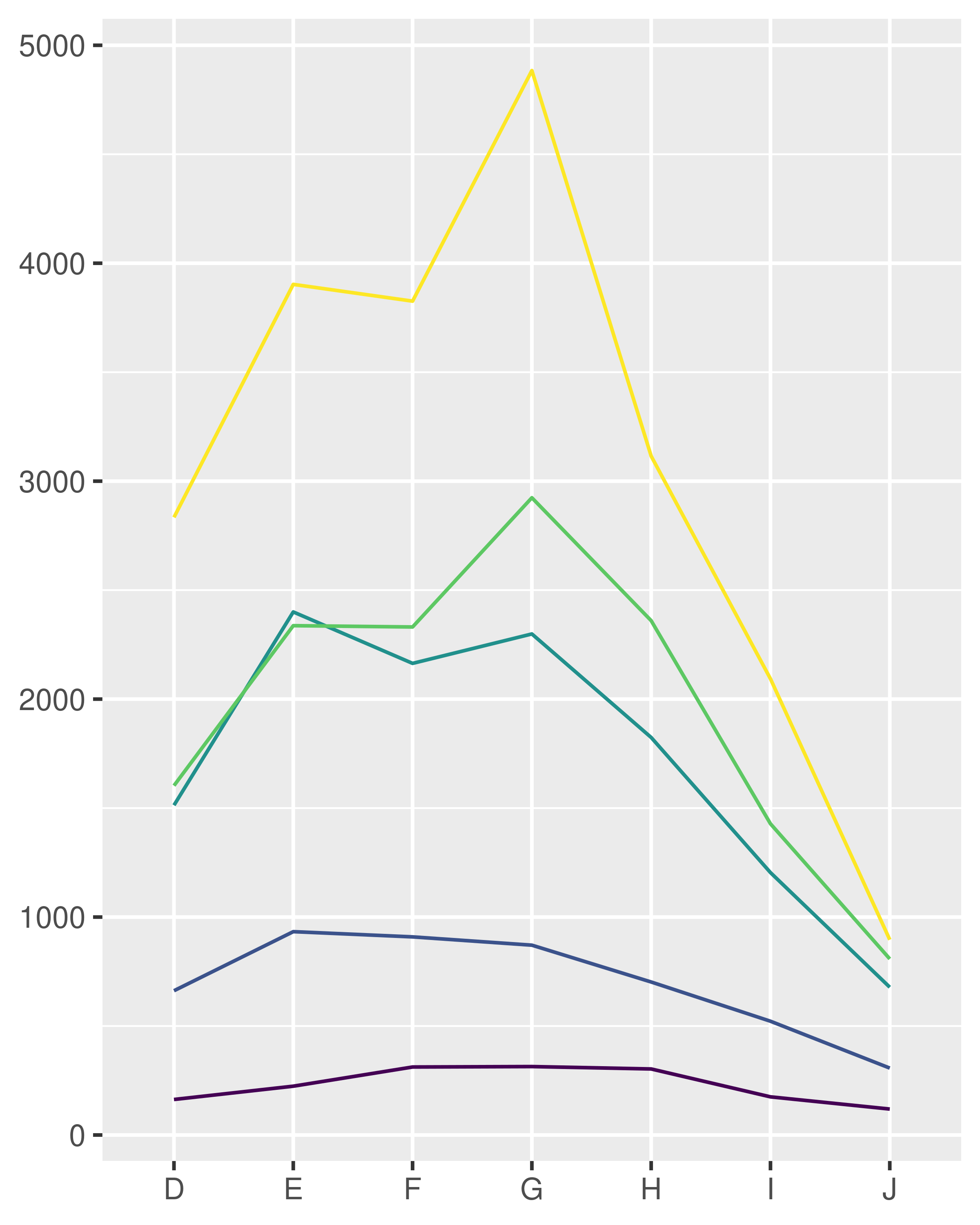 There are three position adjustments that are primarily useful for points: 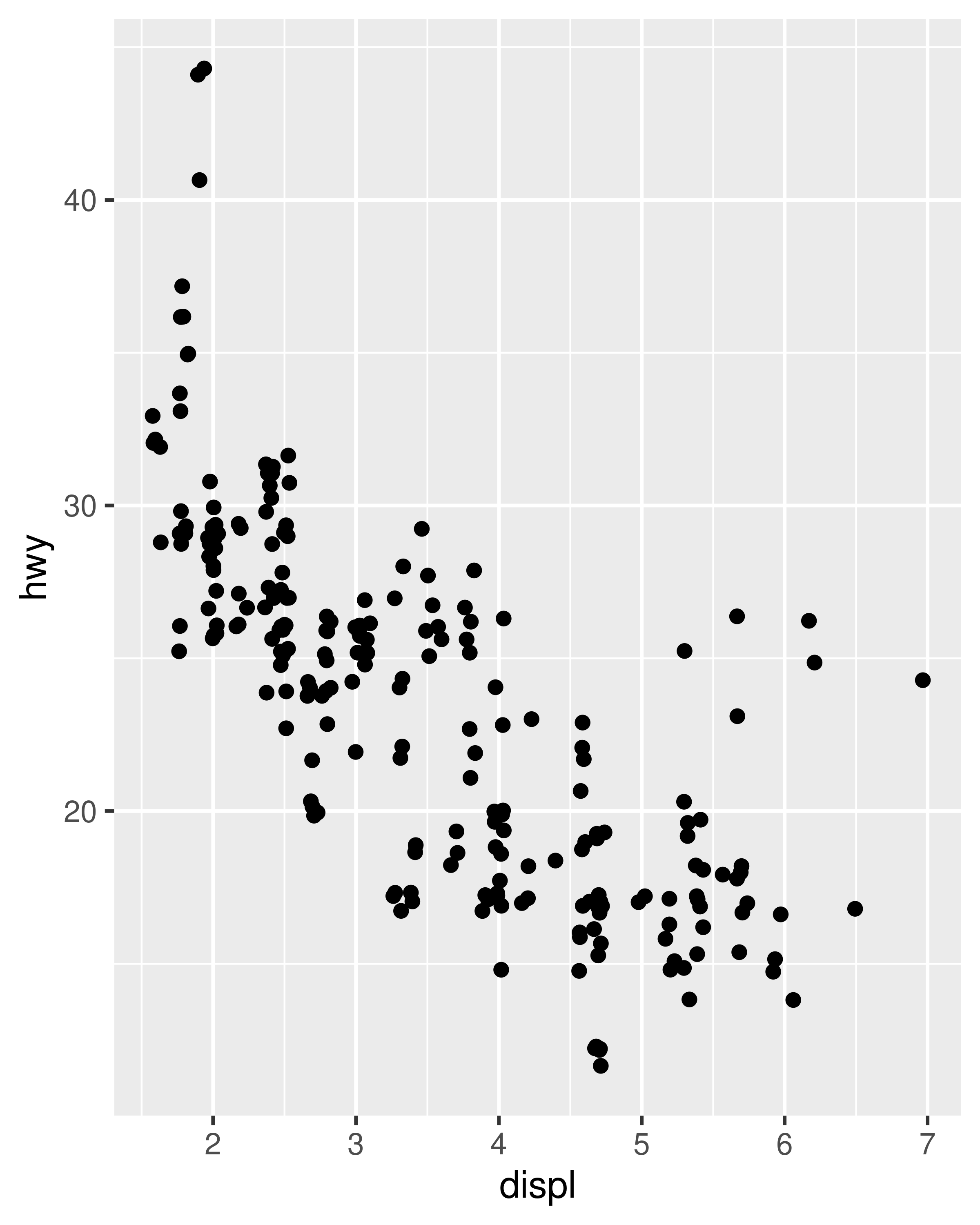 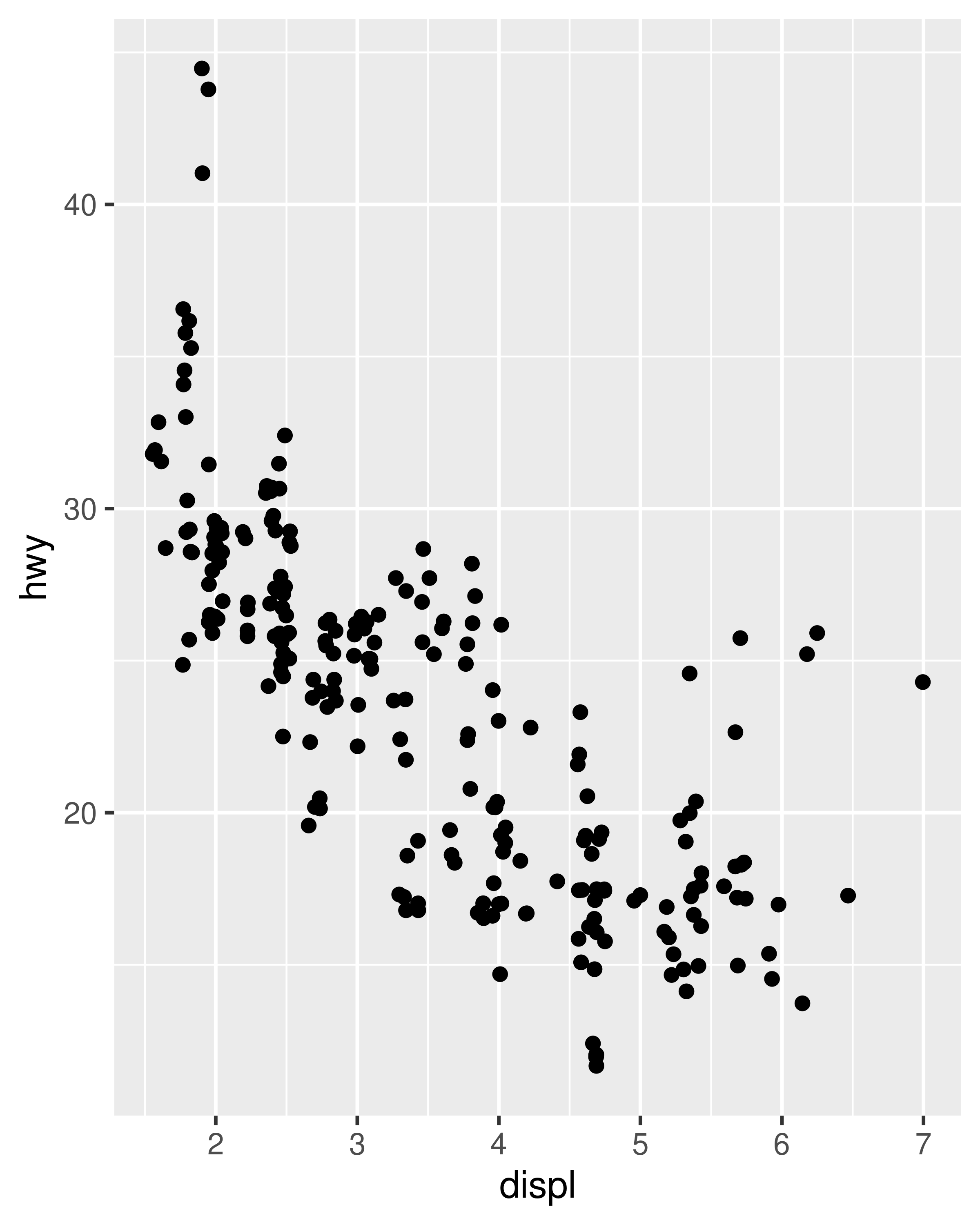 This is rather verbose, so geom_jitter() provides a convenient shortcut:

Continuous data typically doesn’t overlap exactly, and when it does (because of high data density) minor adjustments, like jittering, are often insufficient to fix the problem. For this reason, position adjustments are generally most useful for discrete data.

13 Mastering the grammar
15 Scales and guides