The goal of this chapter is to teach you how to produce useful graphics with ggplot2 as quickly as possible. You’ll learn the basics of ggplot() along with some useful “recipes” to make the most important plots. ggplot() allows you to make complex plots with just a few lines of code because it’s based on a rich underlying theory, the grammar of graphics. Here we’ll skip the theory and focus on the practice, and in later chapters you’ll learn how to use the full expressive power of the grammar.

In this chapter you’ll learn:

In this chapter, we’ll mostly use one data set that’s bundled with ggplot2: mpg. It includes information about the fuel economy of popular car models in 1999 and 2008, collected by the US Environmental Protection Agency, http://fueleconomy.gov. You can access the data by loading ggplot2:

The variables are mostly self-explanatory:

This dataset suggests many interesting questions. How are engine size and fuel economy related? Do certain manufacturers care more about fuel economy than others? Has fuel economy improved in the last ten years? We will try to answer some of these questions, and in the process learn how to create some basic plots with ggplot2. 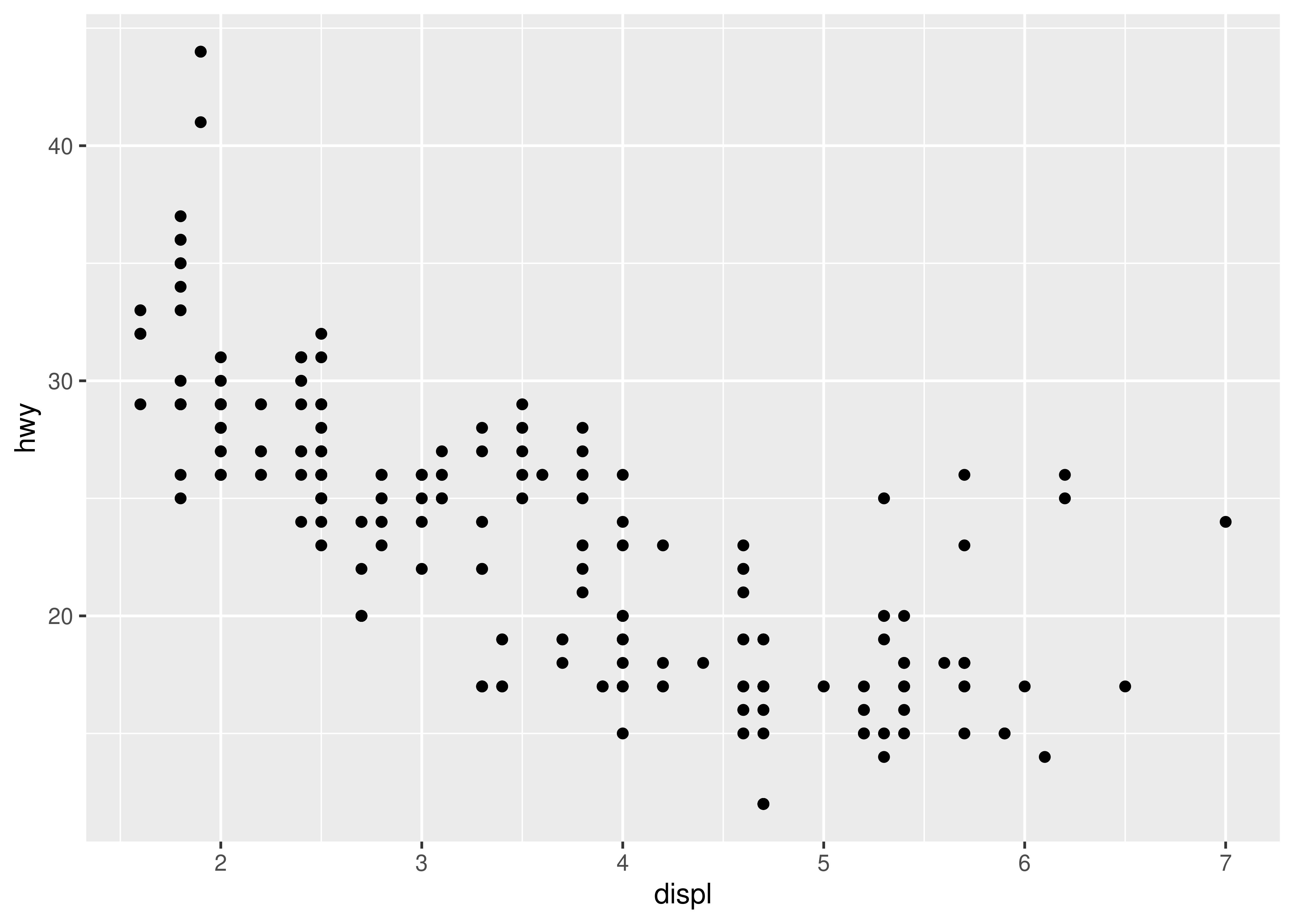 This produces a scatterplot defined by:

Pay attention to the structure of this function call: data and aesthetic mappings are supplied in ggplot(), then layers are added on with +. This is an important pattern, and as you learn more about ggplot2 you’ll construct increasingly sophisticated plots by adding on more types of components.

Almost every plot maps a variable to x and y, so naming these aesthetics is tedious, so the first two unnamed arguments to aes() will be mapped to x and y. This means that the following code is identical to the example above:

I’ll stick to that style throughout the book, so don’t forget that the first two arguments to aes() are x and y. Note that I’ve put each command on a new line. I recommend doing this in your own code, so it’s easy to scan a plot specification and see exactly what’s there. In this chapter, I’ll sometimes use just one line per plot, because it makes it easier to see the differences between plot variations.

The plot shows a strong correlation: as the engine size gets bigger, the fuel economy gets worse. There are also some interesting outliers: some cars with large engines get higher fuel economy than average. What sort of cars do you think they are?

To add additional variables to a plot, we can use other aesthetics like colour, shape, and size (NB: while I use British spelling throughout this book, ggplot2 also accepts American spellings). These work in the same way as the x and y aesthetics, and are added into the call to aes():

ggplot2 takes care of the details of converting data (e.g., ‘f’, ‘r’, ‘4’) into aesthetics (e.g., ‘red’, ‘yellow’, ‘green’) with a scale. There is one scale for each aesthetic mapping in a plot. The scale is also responsible for creating a guide, an axis or legend, that allows you to read the plot, converting aesthetic values back into data values. For now, we’ll stick with the default scales provided by ggplot2. You’ll learn how to override them in Chapter 11.

To learn more about those outlying variables in the previous scatterplot, we could map the class variable to colour: 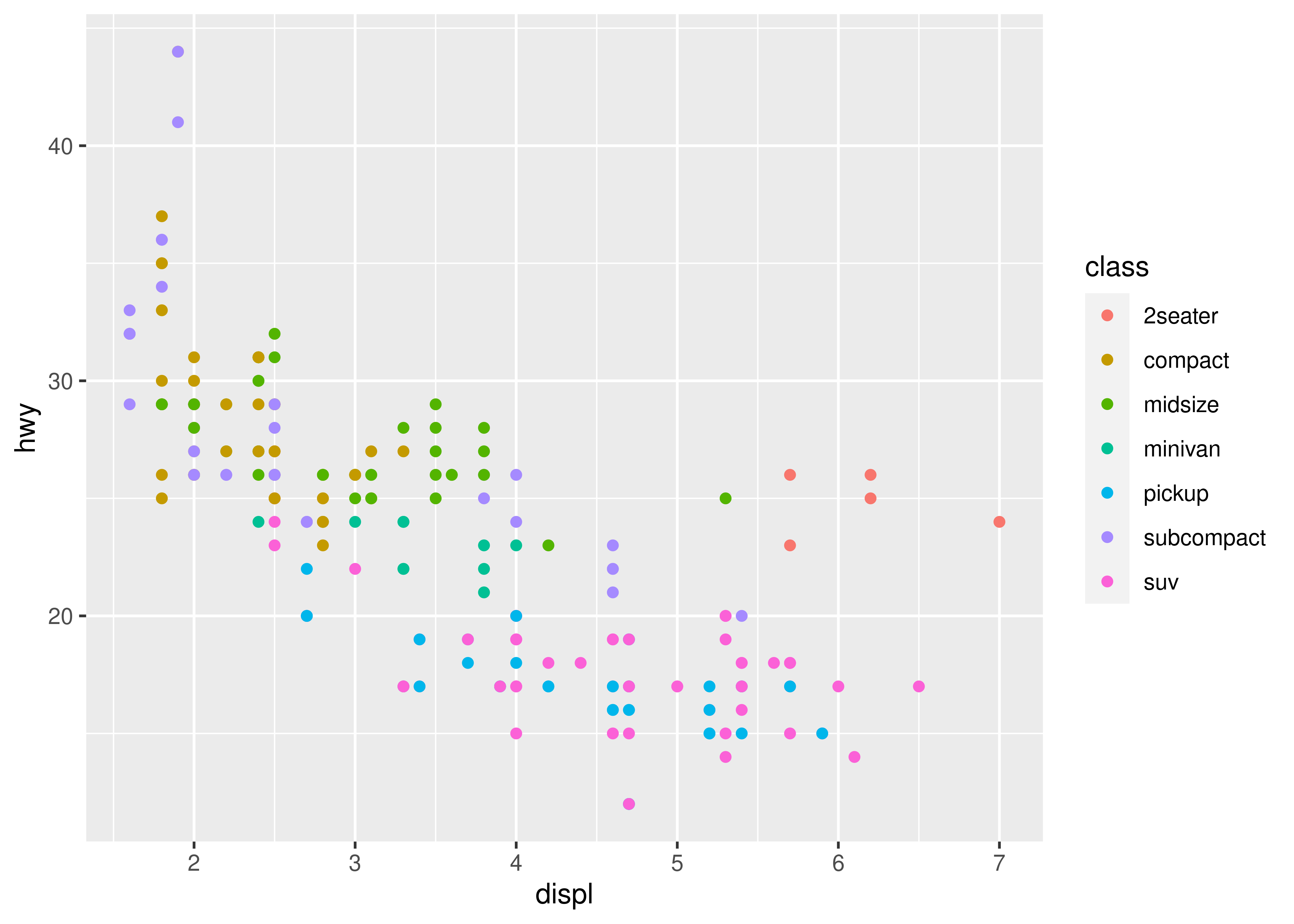 This gives each point a unique colour corresponding to its class. The legend allows us to read data values from the colour, showing us that the group of cars with unusually high fuel economy for their engine size are two seaters: cars with big engines, but lightweight bodies.

If you want to set an aesthetic to a fixed value, without scaling it, do so in the individual layer outside of aes(). Compare the following two plots: In the first plot, the value “blue” is scaled to a pinkish colour, and a legend is added. In the second plot, the points are given the R colour blue. This is an important technique and you’ll learn more about it in Section 14.4.2. See vignette("ggplot2-specs") for the values needed for colour and other aesthetics.

Different types of aesthetic attributes work better with different types of variables. For example, colour and shape work well with categorical variables, while size works well for continuous variables. The amount of data also makes a difference: if there is a lot of data it can be hard to distinguish different groups. An alternative solution is to use faceting, as described next.

When using aesthetics in a plot, less is usually more. It’s difficult to see the simultaneous relationships among colour and shape and size, so exercise restraint when using aesthetics. Instead of trying to make one very complex plot that shows everything at once, see if you can create a series of simple plots that tell a story, leading the reader from ignorance to knowledge.

Another technique for displaying additional categorical variables on a plot is faceting. Faceting creates tables of graphics by splitting the data into subsets and displaying the same graph for each subset. You’ll learn more about faceting in Section 17, but it’s such a useful technique that you need to know it right away.

There are two types of faceting: grid and wrapped. Wrapped is the most useful, so we’ll discuss it here, and you can learn about grid faceting later. To facet a plot you simply add a faceting specification with facet_wrap(), which takes the name of a variable preceded by ~. 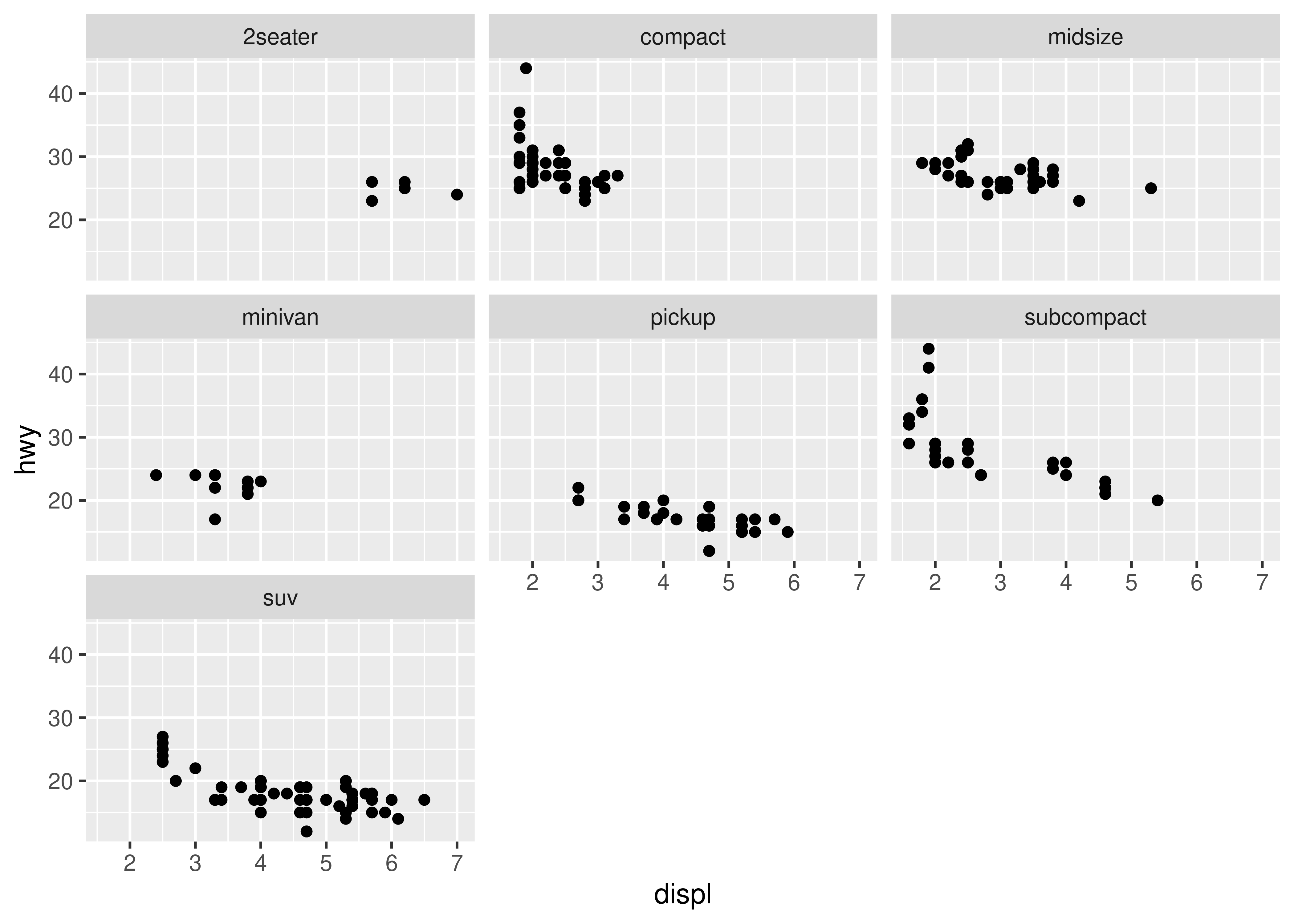 You might wonder when to use faceting and when to use aesthetics. You’ll learn more about the relative advantages and disadvantages of each in Section 17.5.

You might guess that by substituting geom_point() for a different geom function, you’d get a different type of plot. That’s a great guess! In the following sections, you’ll learn about some of the other important geoms provided in ggplot2. This isn’t an exhaustive list, but should cover the most commonly used plot types. You’ll learn more in Chapters 3 and 4.

If you have a scatterplot with a lot of noise, it can be hard to see the dominant pattern. In this case it’s useful to add a smoothed line to the plot with geom_smooth(): 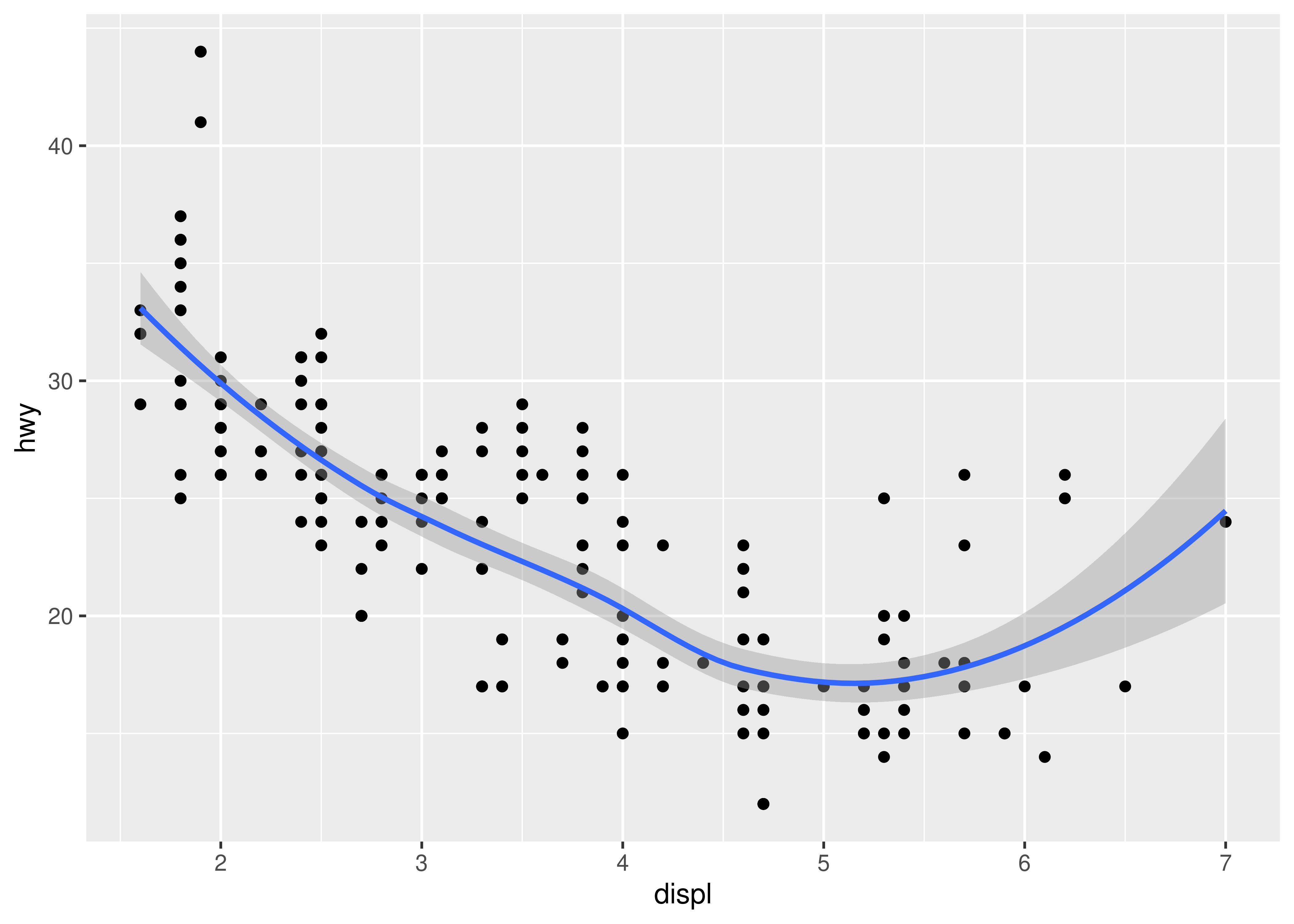 An important argument to geom_smooth() is the method, which allows you to choose which type of model is used to fit the smooth curve:

When a set of data includes a categorical variable and one or more continuous variables, you will probably be interested to know how the values of the continuous variables vary with the levels of the categorical variable. Say we’re interested in seeing how fuel economy varies within cars that have the same kind of drivetrain. We might start with a scatterplot like this: Because there are few unique values of both drv and hwy, there is a lot of overplotting. Many points are plotted in the same location, and it’s difficult to see the distribution. There are three useful techniques that help alleviate the problem:

These are illustrated below: 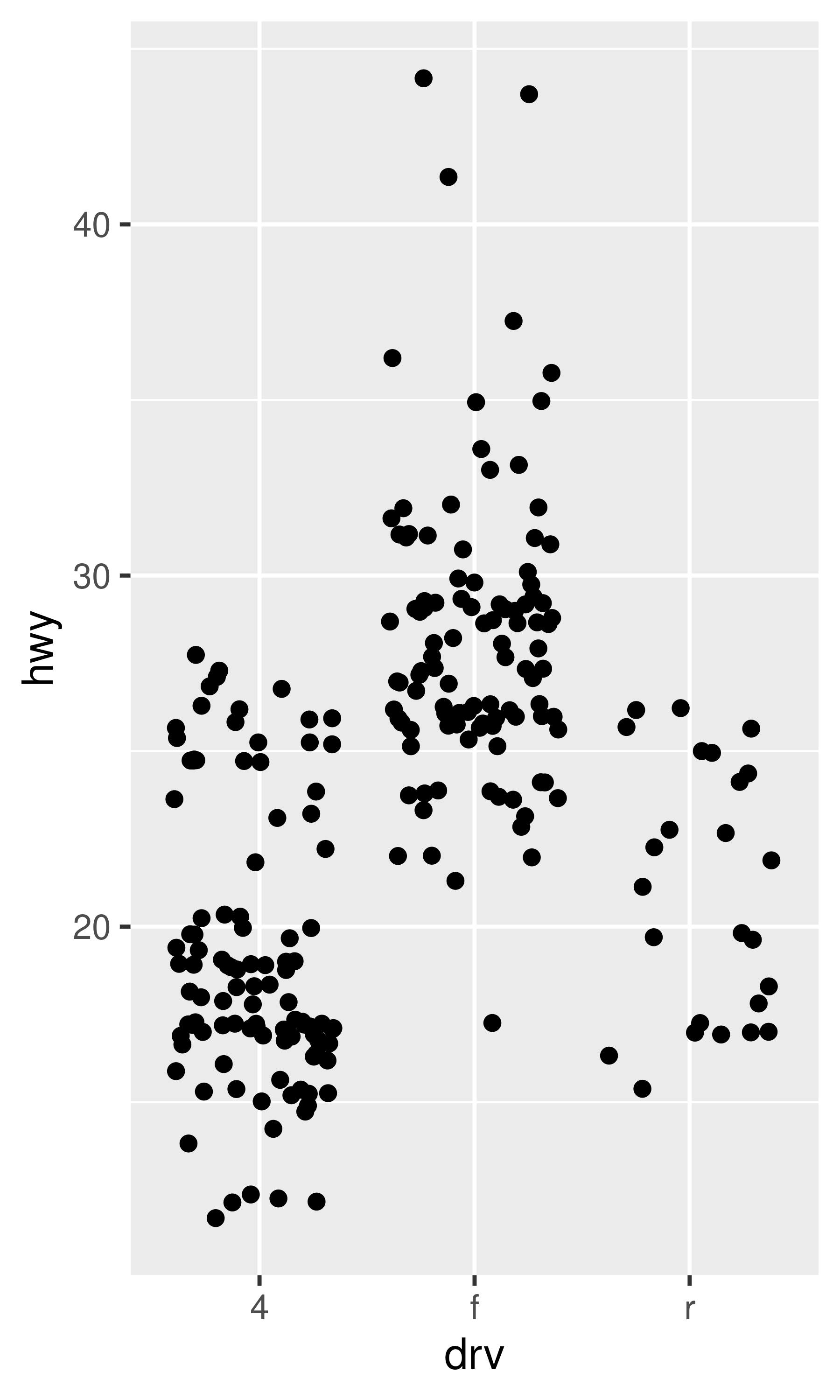 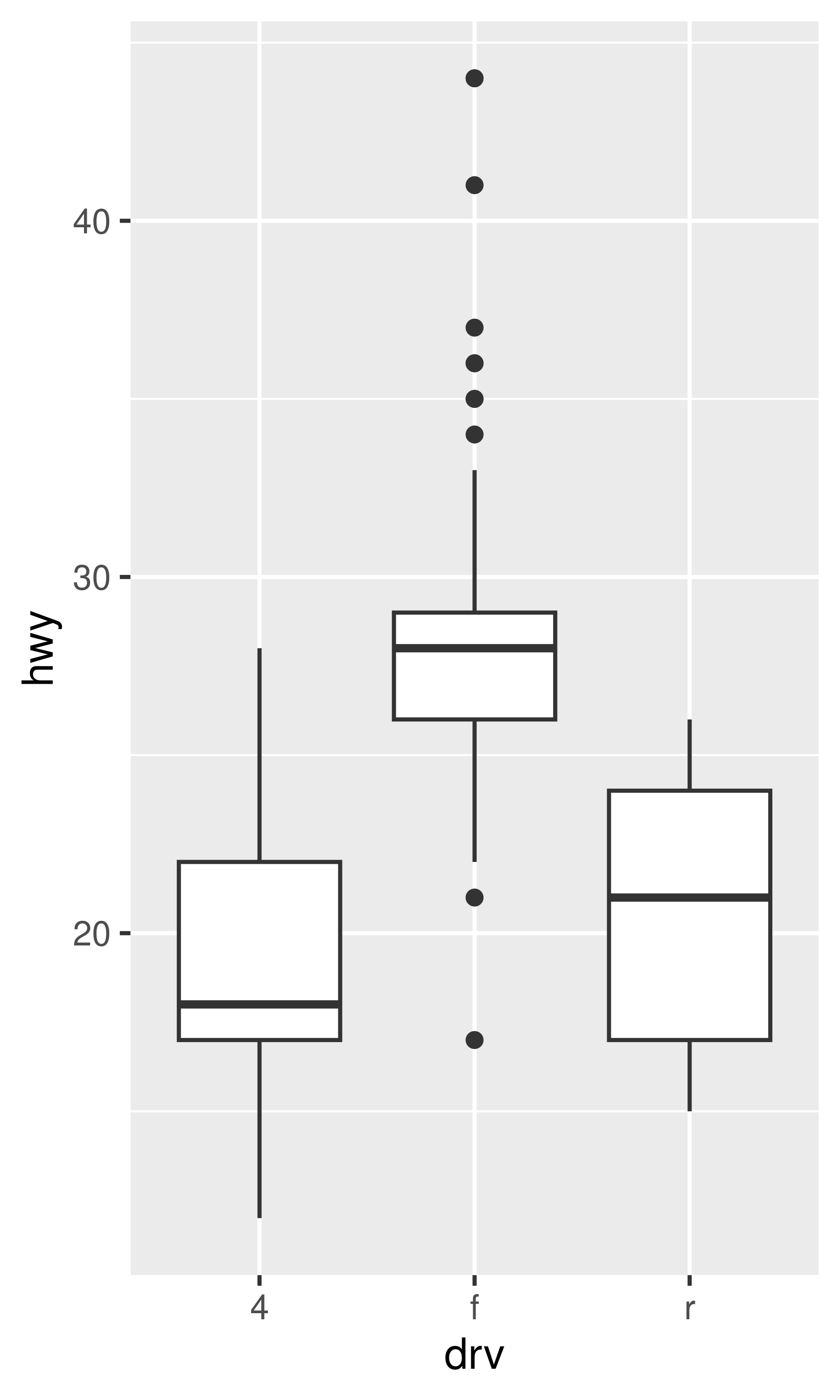 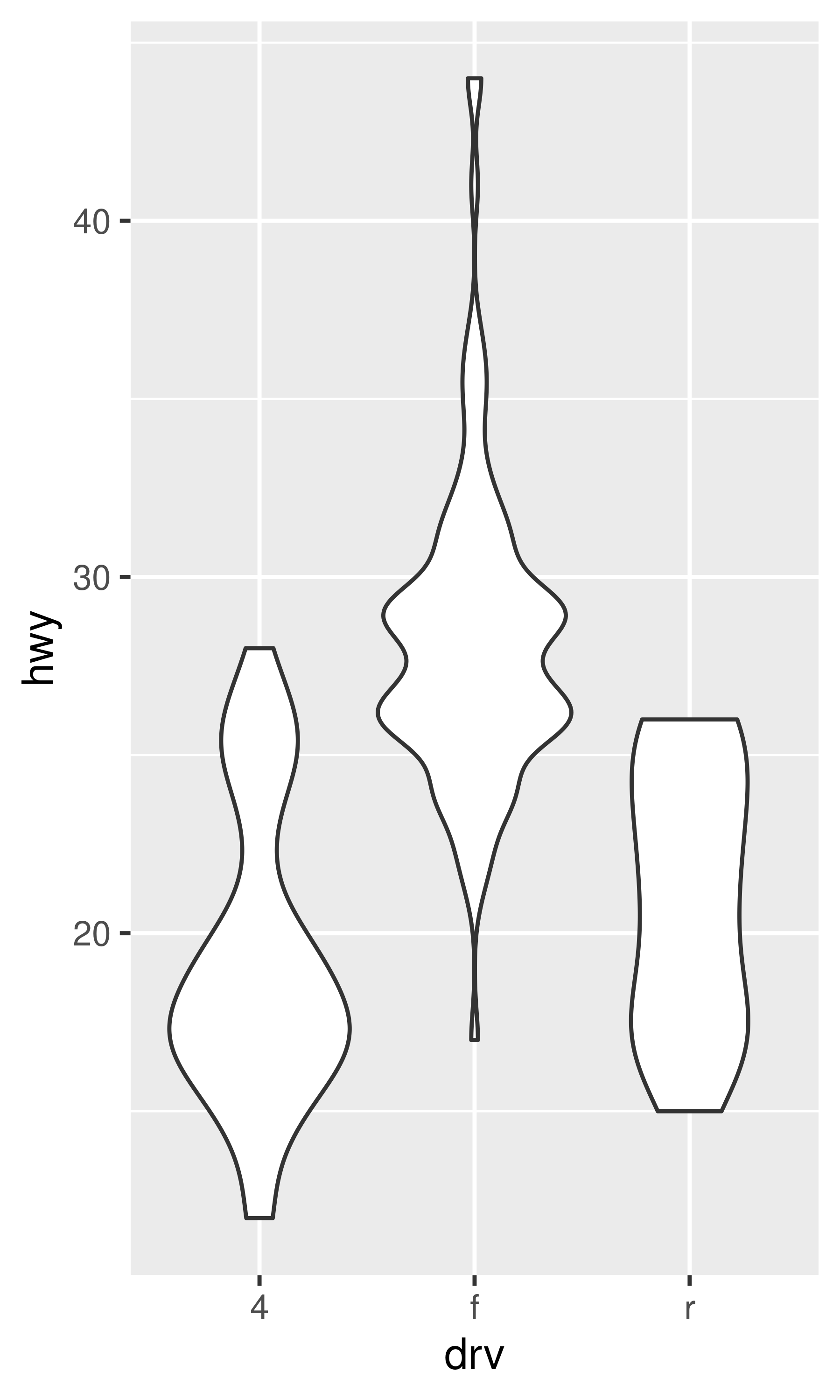 Each method has its strengths and weaknesses. Boxplots summarise the bulk of the distribution with only five numbers, while jittered plots show every point but only work with relatively small datasets. Violin plots give the richest display, but rely on the calculation of a density estimate, which can be hard to interpret.

For jittered points, geom_jitter() offers the same control over aesthetics as geom_point(): size, colour, and shape. For geom_boxplot() and geom_violin(), you can control the outline colour or the internal fill colour. 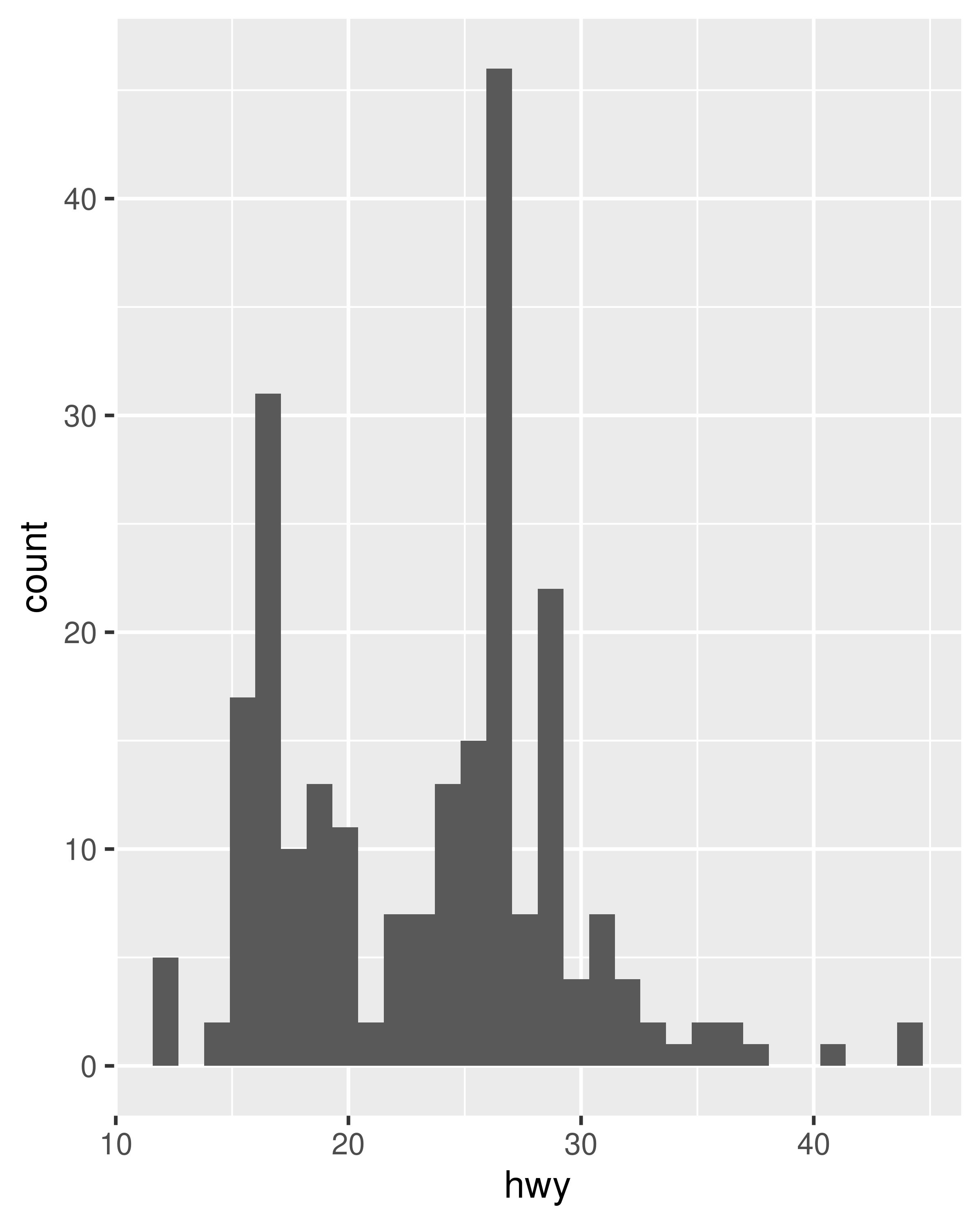 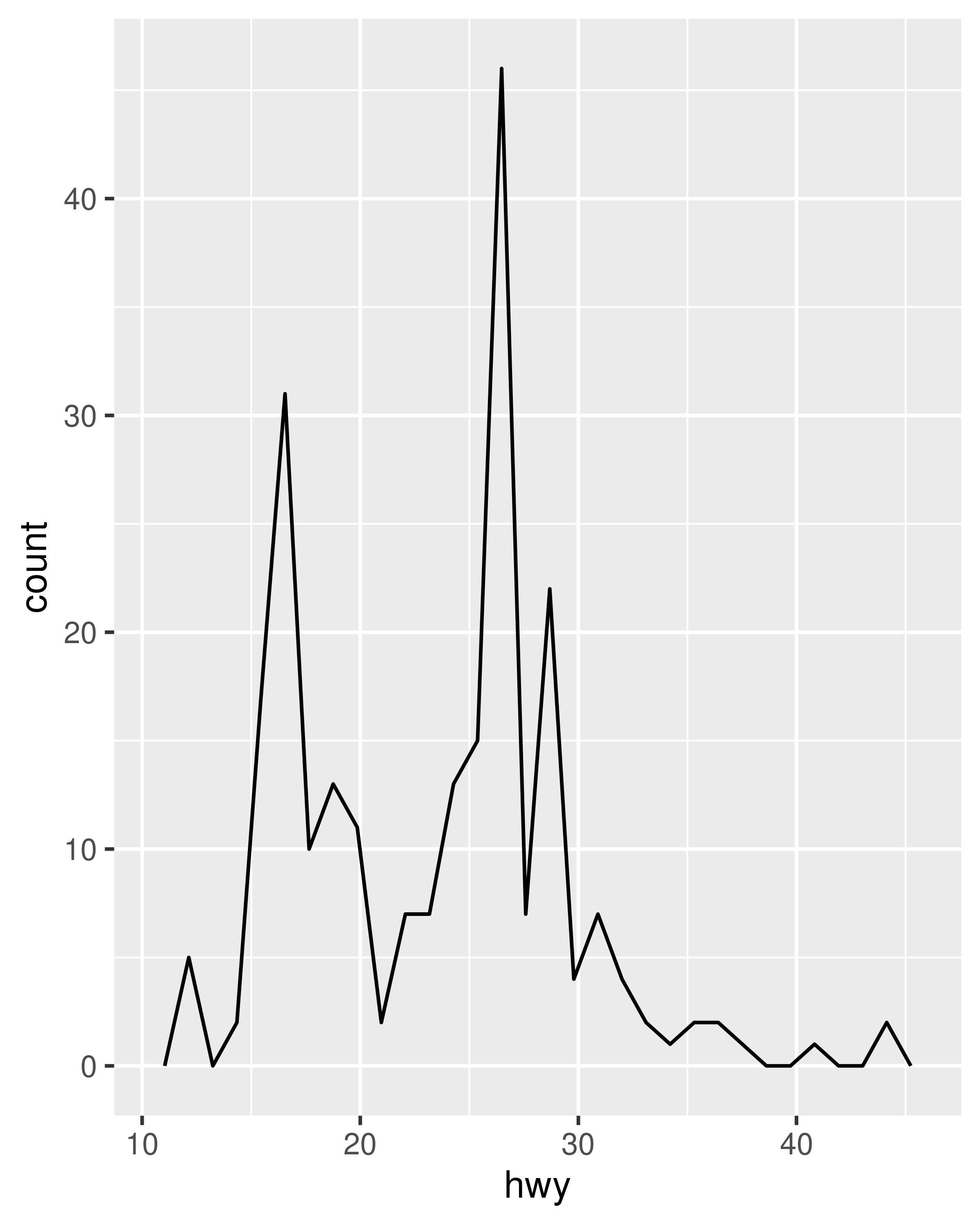 You can control the width of the bins with the binwidth argument (if you don’t want evenly spaced bins you can use the breaks argument). It is very important to experiment with the bin width. The default just splits your data into 30 bins, which is unlikely to be the best choice. You should always try many bin widths, and you may find you need multiple bin widths to tell the full story of your data. 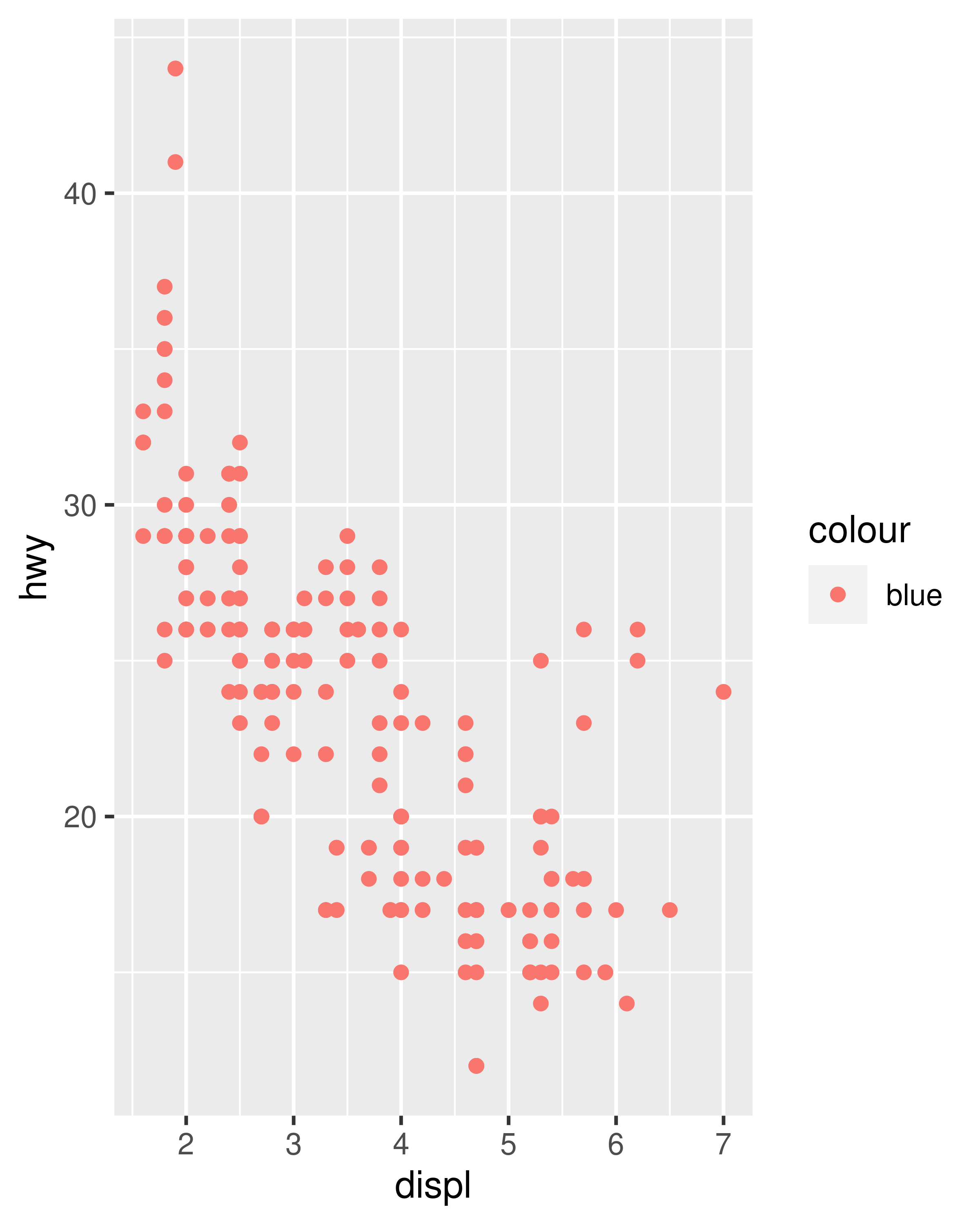 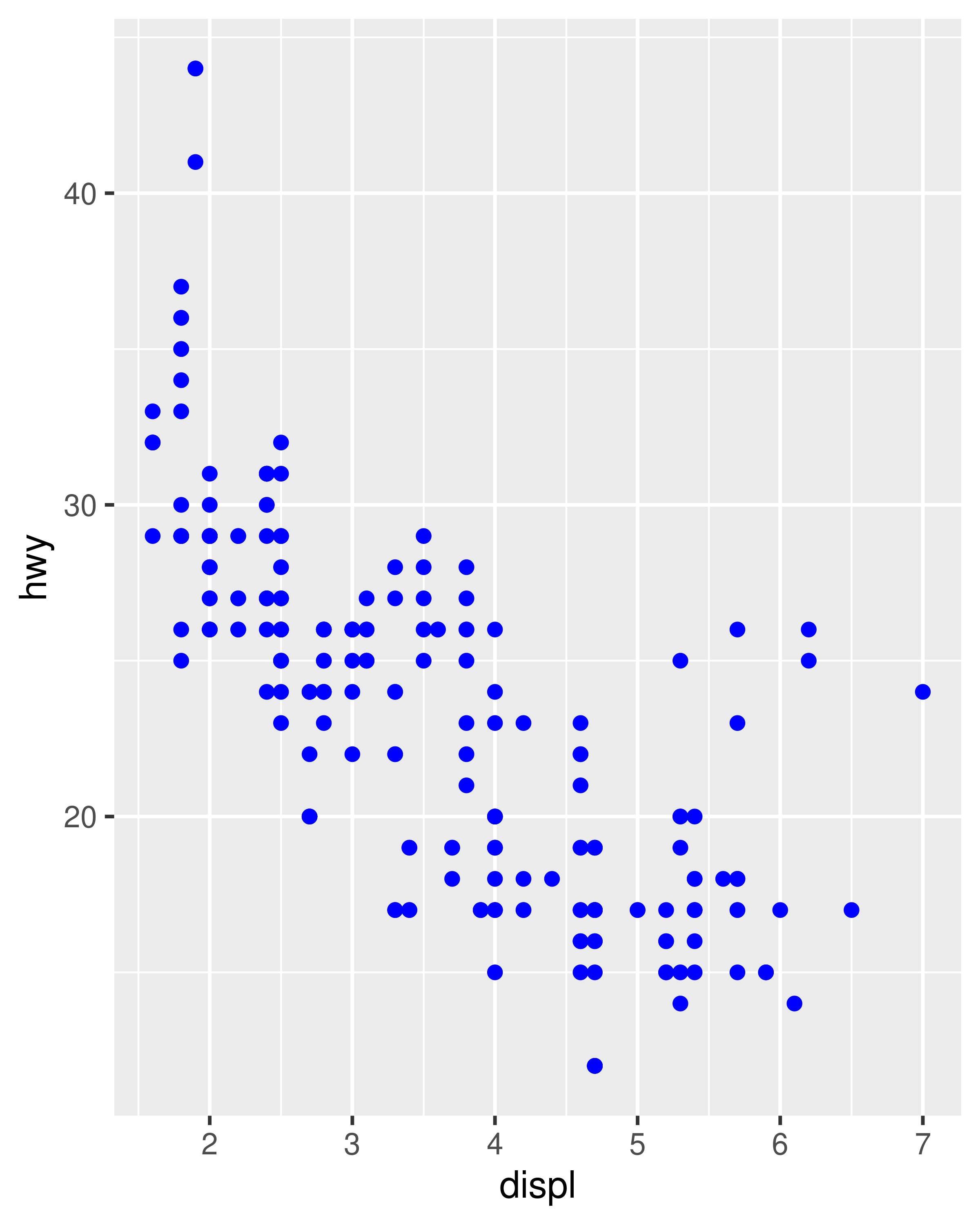 An alternative to the frequency polygon is the density plot, geom_density(). I’m not a fan of density plots because they are harder to interpret since the underlying computations are more complex. They also make assumptions that are not true for all data, namely that the underlying distribution is continuous, unbounded, and smooth. 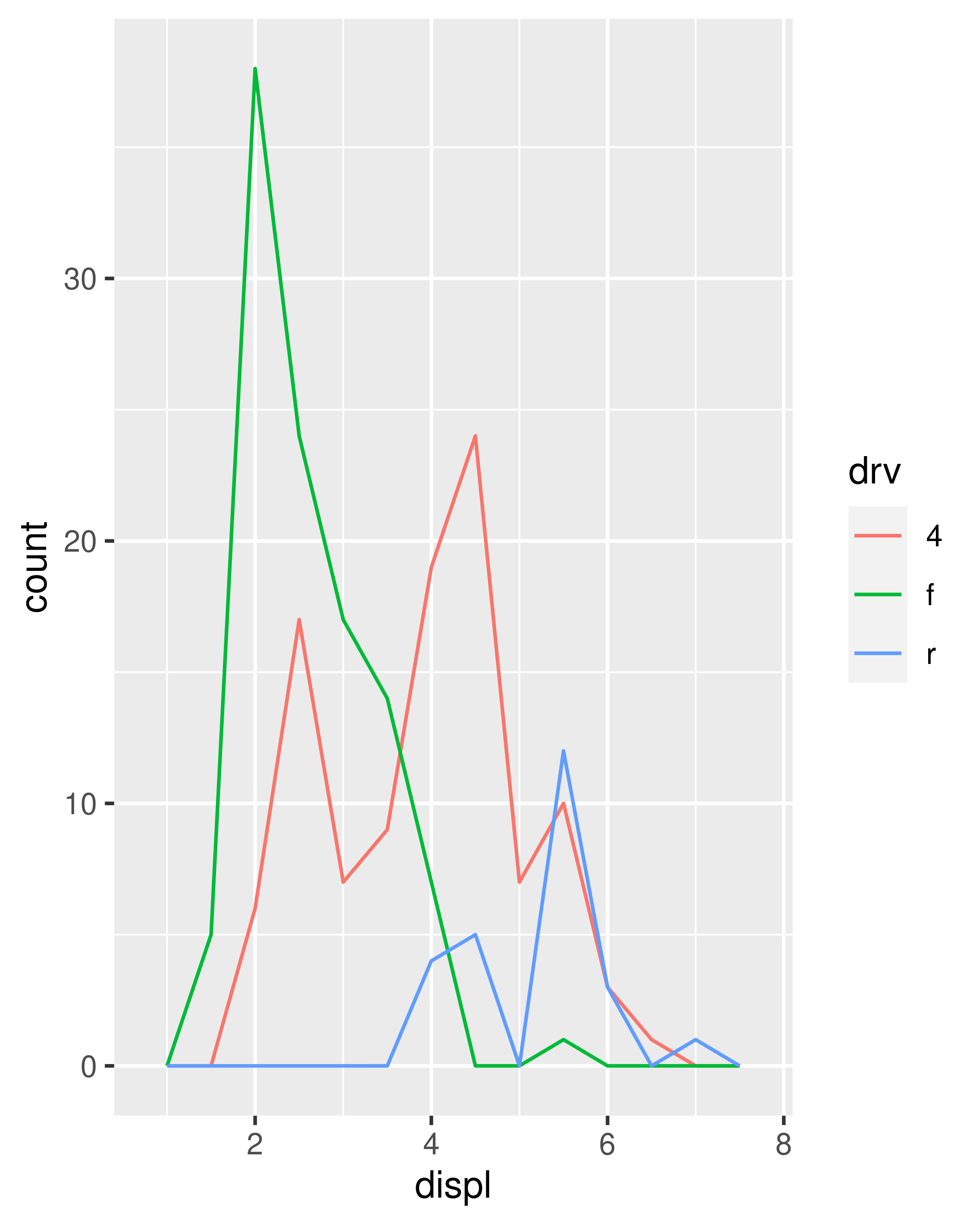 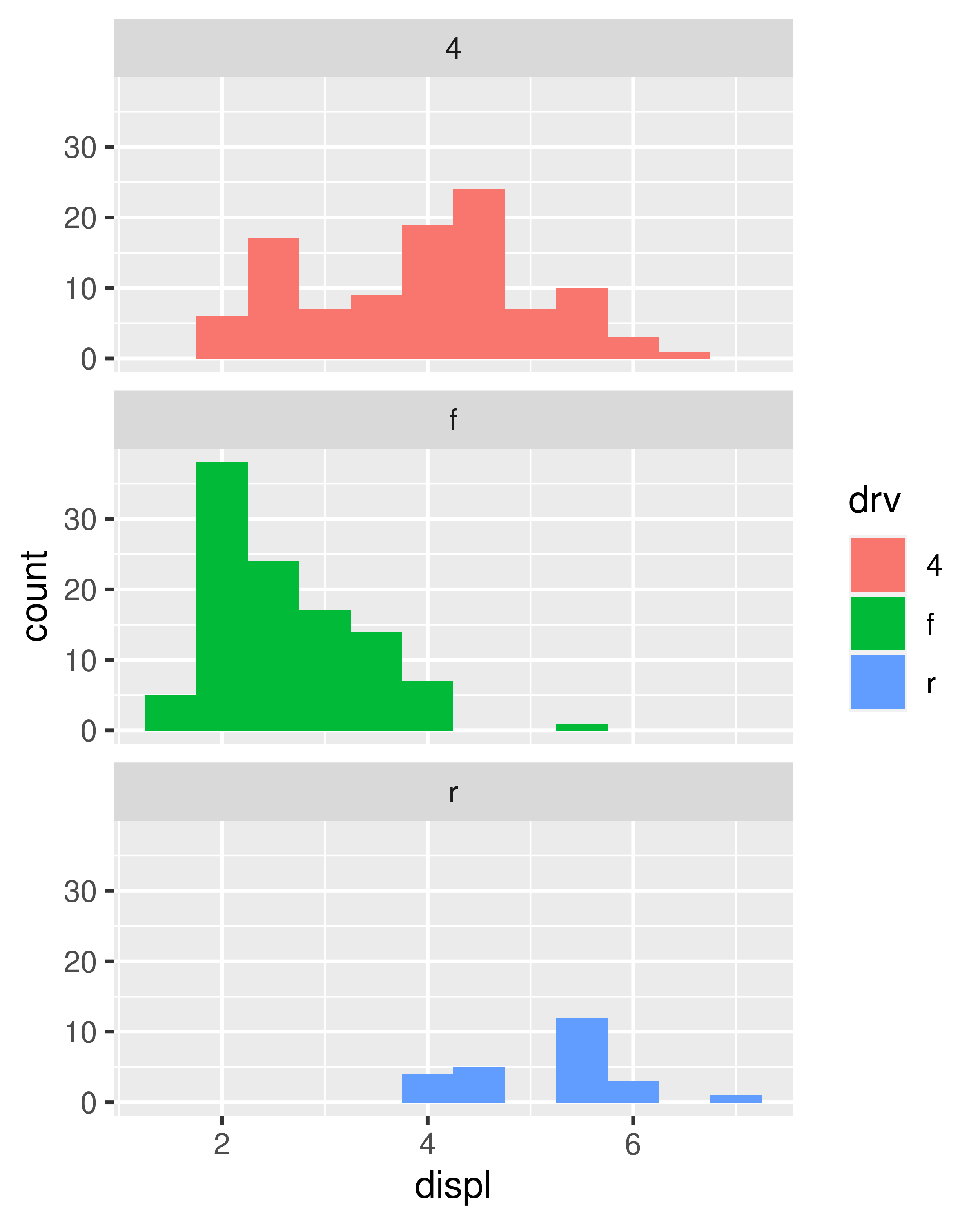 The discrete analogue of the histogram is the bar chart, geom_bar(). It’s easy to use:

Bar charts can be confusing because there are two rather different plots that are both commonly called bar charts. The above form expects you to have unsummarised data, and each observation contributes one unit to the height of each bar. The other form of bar chart is used for presummarised data. For example, you might have three drugs with their average effect:

To display this sort of data, you need to tell geom_bar() to not run the default stat which bins and counts the data. However, I think it’s even better to use geom_point() because points take up less space than bars, and don’t require that the y axis includes 0. Line and path plots are typically used for time series data. Line plots join the points from left to right, while path plots join them in the order that they appear in the dataset (in other words, a line plot is a path plot of the data sorted by x value). Line plots usually have time on the x-axis, showing how a single variable has changed over time. Path plots show how two variables have simultaneously changed over time, with time encoded in the way that observations are connected.

Because the year variable in the mpg dataset only has two values, we’ll show some time series plots using the economics dataset, which contains economic data on the US measured over the last 40 years. The figure below shows two plots of unemployment over time, both produced using geom_line(). The first shows the unemployment rate while the second shows the median number of weeks unemployed. We can already see some differences in these two variables, particularly in the last peak, where the unemployment percentage is lower than it was in the preceding peaks, but the length of unemployment is high. 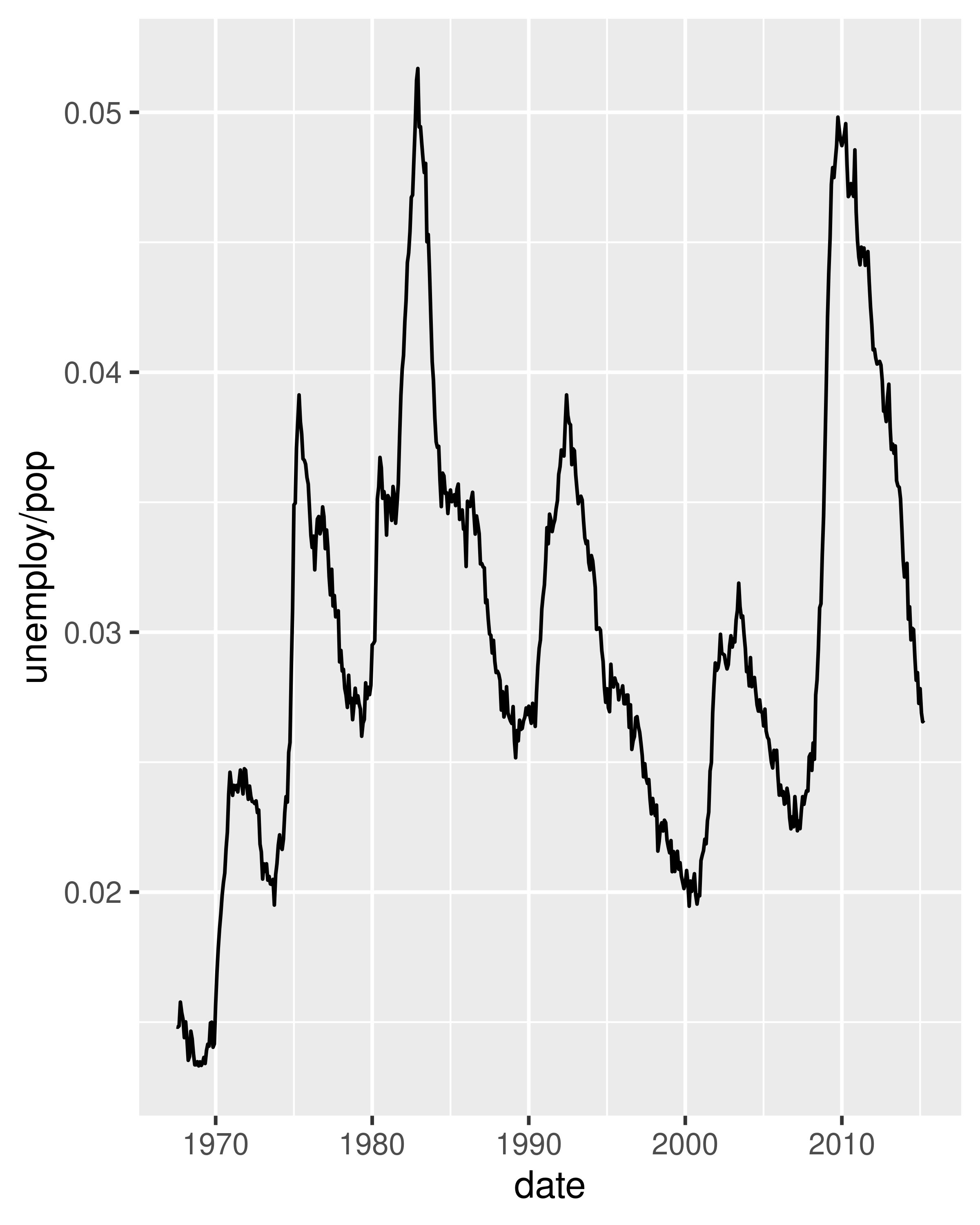 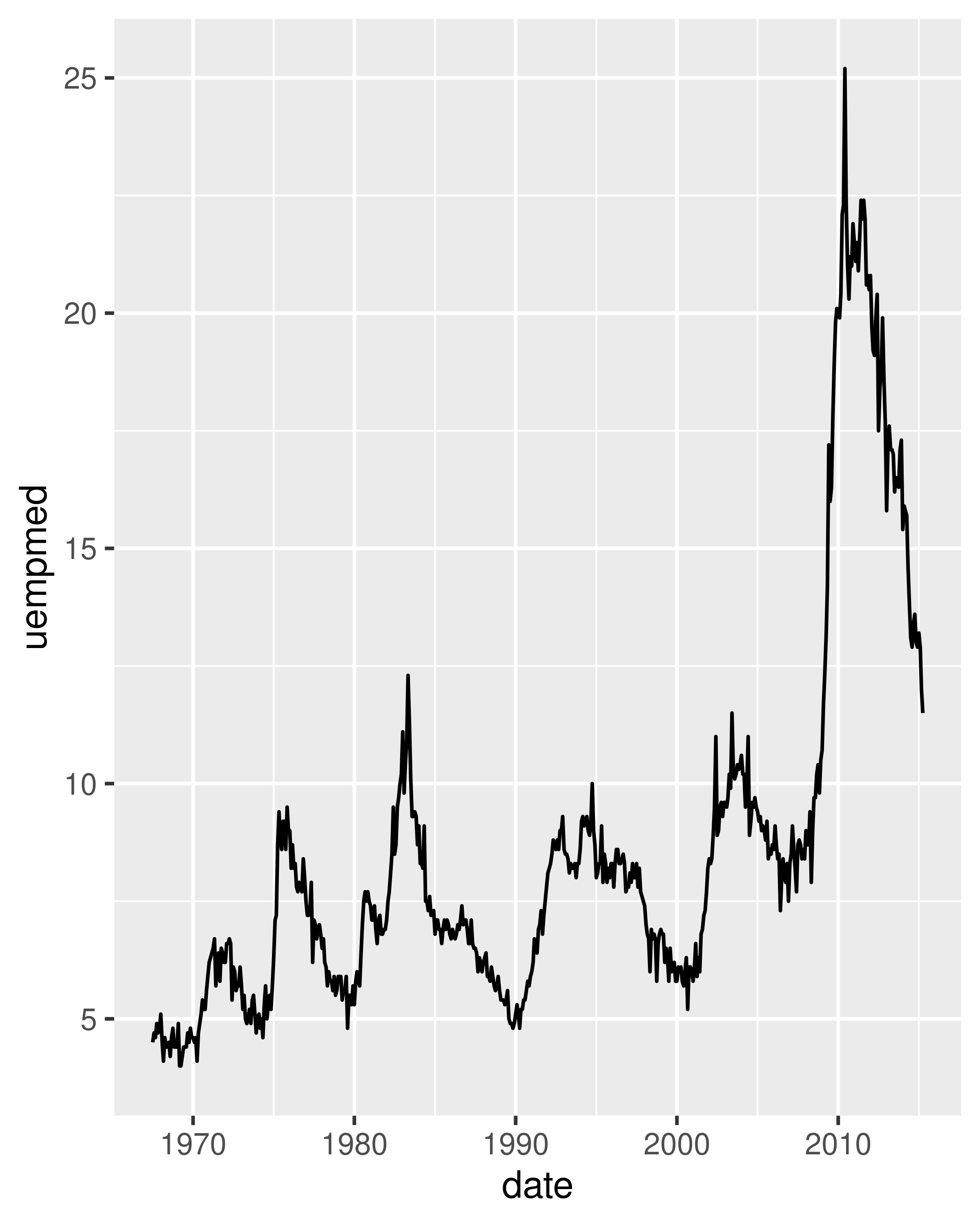 To examine this relationship in greater detail, we would like to draw both time series on the same plot. We could draw a scatterplot of unemployment rate vs. length of unemployment, but then we could no longer see the evolution over time. The solution is to join points adjacent in time with line segments, forming a path plot.

Below we plot unemployment rate vs. length of unemployment and join the individual observations with a path. Because of the many line crossings, the direction in which time flows isn’t easy to see in the first plot. In the second plot, we colour the points to make it easier to see the direction of time. 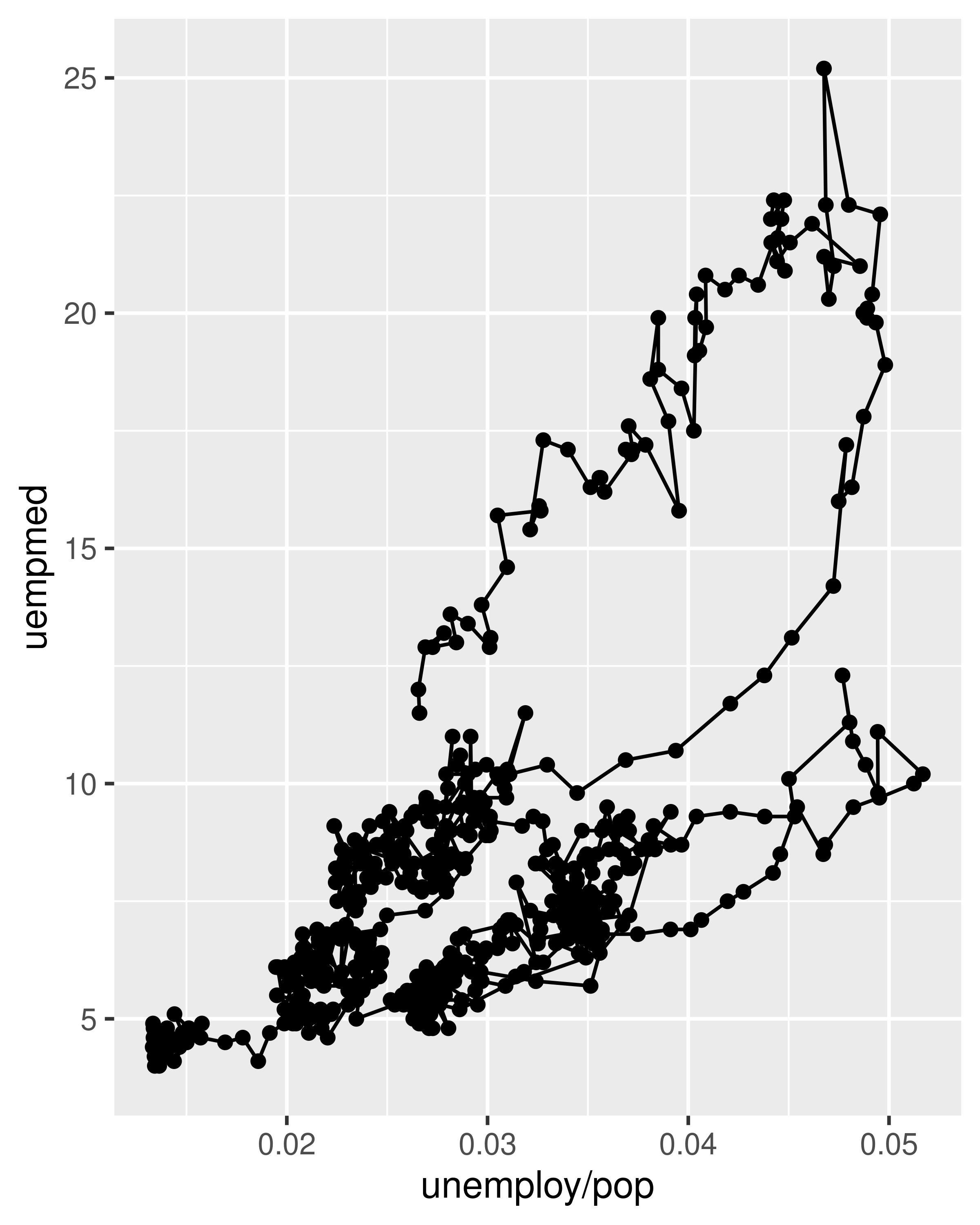 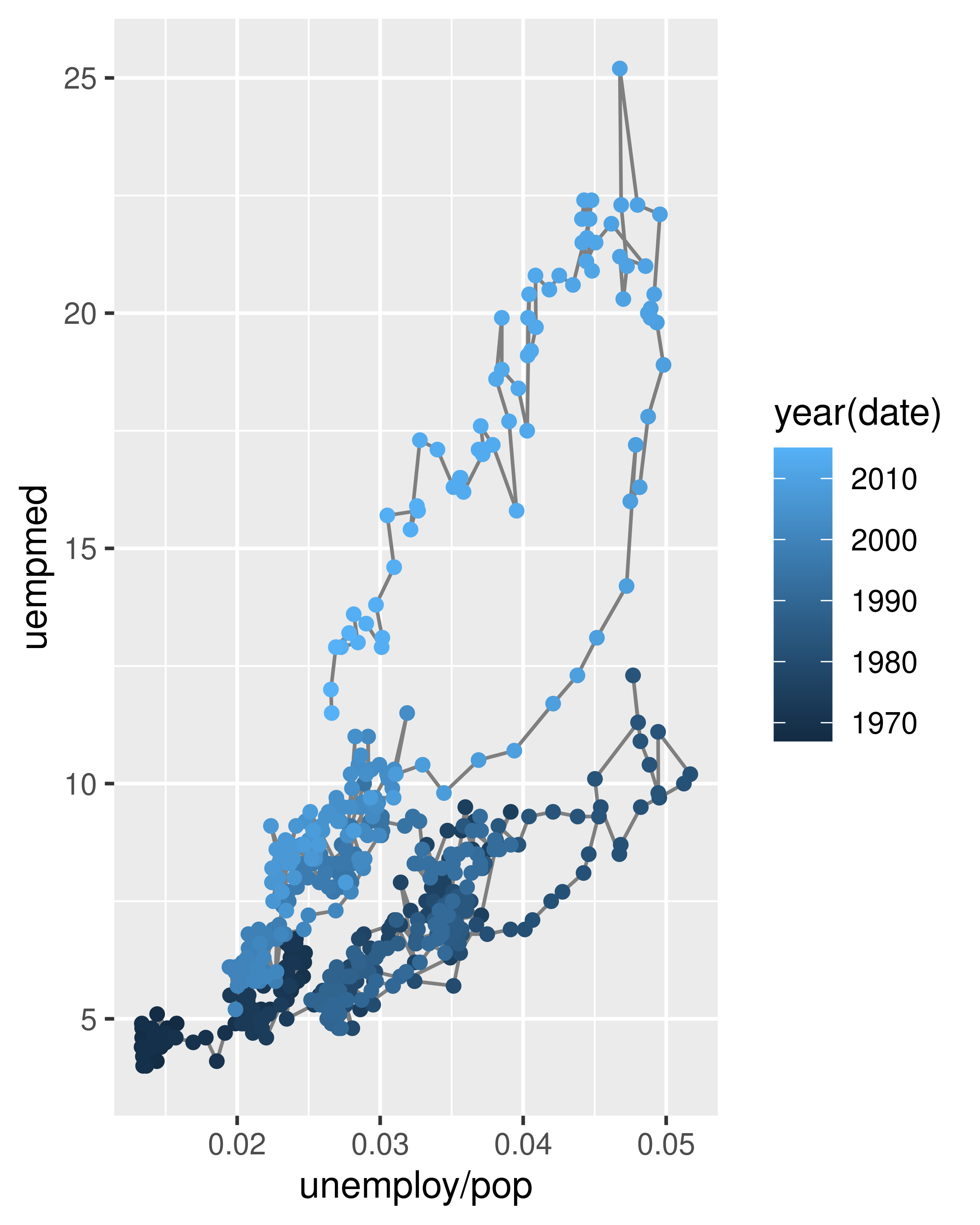 With longitudinal data, you often want to display multiple time series on each plot, each series representing one individual. To do this you need to map the group aesthetic to a variable encoding the group membership of each observation. This is explained in more depth in Chapter 4.

You’ll learn the full range of options available in later chapters, but two families of useful helpers let you make the most common modifications. xlab() and ylab() modify the x- and y-axis labels: xlim() and ylim() modify the limits of axes: Changing the axes limits sets values outside the range to NA. You can suppress the associated warning with na.rm = TRUE, but be careful. If your plot calculates summary statistics (e.g., sample mean), this conversion to NA occurs before the summary statistics are computed, and may lead to undesirable results in some situations.

Most of the time you create a plot object and immediately plot it, but you can also save a plot to a variable and manipulate it:

Once you have a plot object, there are a few things you can do with it:

You’ll learn more about how to manipulate these objects in Chapter 19.